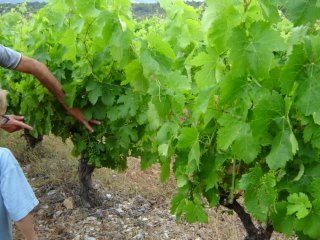 There are two vines in this picture. Are they the same cepage, or are they different? (Answers on a postcard, please).

They belong to Patrick Maurel who took us round his vineyard just as the heavens opened, to show us his corner of paradise and how he keeps it that way. At the foot of the Pic St Loup just metres from the pathway that wends its way around the outcrop, and very many metres from the nearest road, his vines live tranquilly, undisturbed by much that's a pesky bug, their decades old roots foraging successfully for water way down beneath the surface, and kept company by a cloud of insect life of all colours as you tread carefully to avoid spiking your open toes on the odd vicious little thistle. 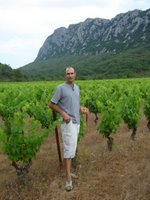 He lets nature regulate most of the flora, but intervenes with electric fences to keep out the wild boar. If an insect pest does find its way over the 658m of craggy cliff, it's zapped pretty smartish with magic potions based either on nettle or bracken which Patrick concocts himself. His vines are a picture of health although he does very little in the way of mechanical intervention. He has not bought tractor fuel for 4 years, is not encumbered by crippling debt to pay for machines which trim this, remove that, kill the rest, and is happy to maintain a keen eye on the progress of his vines without unnecessary labour.

We went with the boys who were delighted to be sat in the boot of an old Citroen AX which had had its back seat removed as Patrick took us along stony, bumpy tracks deep into the 'bush' to be shown the magic of his cultivation. 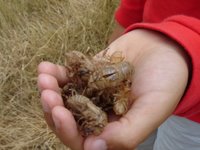 We observed how his grandfather had practised transplanting fruit trees onto established trees around the vineyard and which now produce apricots, pears and so on. My youngest gorged himself on some freshly-picked apricots and kept two of the stones lovingly to plant in a pot at home. My eldest discovered discarded chrysalis shells of cigales and dived off in search of them to have them sitting on the back of the passenger seat of the AX, their clawed footless 'boots' sharp enough for them to cling on without much problem.

The boys enjoyed racing about looking for dead insects, finding live ones on branches, and making them jump off, or fly off en masse as they ran through the grass.

Back at Patrick's house just outside St Martin de Londres (where, incidentally, I came to visit a second floor flat to rent in his grandparent's old house where he vinifies his wine on the ground floor, but didn't take it - small world!) he showed us the cool interior of the former bergerie which he is restoring. Vaulted stone ceilings, earth floors, and restricted light sources make it a pleasant place to work during the searing summer months.

The grapes are pressed, and then worked inside a vat with what looks like a very long witch's broom. This airs them and means that he does not need to use yeast to produce flavour. As a result, his wine has the taste of the grape it came from - a natural flavour unpolluted by artificial add-ins. It is light and perfect for drinking with most foods. Like Patrick himself, it is authentic and unpretentious; unadulterated and true to itself. 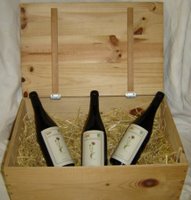 As for the vines in the photo above, maybe you can identify them as easily as he can as being from different cepages. To me, they look the same. He laughed when we tried vainly to spot the differences. He was amazed that it wasn't as obvious to us as to him. Still, I would rather that he was able to tell the difference than me, as he is the vigneron, and I am not!

We rounded off our visit being taken to his potager. The man must have as green fingers as it's possible to have. His 200m² plot was burgeoning with vegetables - aubergines, beans, courgettes, lettuce - you name it, and fruit trees, red currants, black currants, white currants, gooseberries, 30 different varieties of tomato all ancient, and miniature peach trees that the King (one of the Louis' I expect) would have on his table so he was able to pick his peaches fresh off the tree.

We are invited back during the vendange to see him at work. and you can be sure it has been marked on the 'not to be missed' diary. Watch this space...