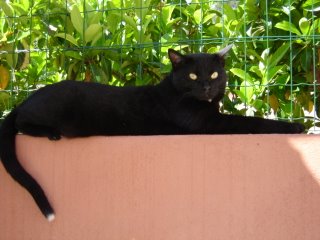 Behold Ulysse; hunter killer. He looks such a sweet and cuddly little chap, doesn't he? But underneath lies the heart and instinct of a ferocious beastie.

We got back from our holiday to a scene of carnage on the landing upstairs. Feathers of a rather attractive tan brown shade scattered liberally and carelessly as though their owner had gone about with a receptical sowing them on good and bad ground indiscriminately.

In fact, their owner was to be found a metre up, stiff as a board lying on top of my Ikea dirty linen container. Not where I expected it to be, naturally. I was thinking more along the lines that the hunter had devoured his prey and left but a few clues as to his deed. I have since come to the conclusion that doing the deed is not part of his aim, but the whole of his aim.

Imagine, if you will, the reclining cat, sprawled elegantly on the gravel of the 'garden', the tip of his paw a hair's breadth from a little body. It is lunch time, and with great modesty but not a little pride, the hunter presents his offering to the 'Head Cat' (me, for those of you not keeping up). He takes a sniff of the delectable aromas wafting up from the inert little figure, his paw dallying playfully with an extended beak.

I ask him why he has not eaten his catch, and he stares at me appalled. "Good God" he would say, "you don't expect me to eat THAT, do you?" Disgust is written all over his body. Cats do 'disgust' marvellously. Like a serious actor who has been asked to play Tinky Winky, he makes a dramatic exit; tail flashing, back feet flicking as though trying to shake off a bad smell and heads directly for his complete but industrially produced bowl of Royal Canin Feline Health Nutrition.

Is it my imagination or do they add a little something to the extent that blood lust no longer leads to a meal, but merely to a savage little game of 'catch'?

I just hope he will not keep this up as songbirds have enough trouble making it across the border from Spain without getting caught in those death nets for them to be caught on a whim by a pampered, evil-eyed ferocious domestic beastie.