Last night was bordering on 'major cock-up' scenario. The boys were off to see their father, but due to forest fires along the Marseille-Montpellier route, the trains were running late, so they left late, so dinner was disrupted, and we turned to the RA for our last ditch attempt at sanity (unwise, with an ado).

We were due to accompany her to a concert, somewhere in Montpellier. When we innocently enquired where the venue might be, we were told she didn't know. So there we were, at the station, in the cold, having no idea where we should be one hour hence.

After some phoning, leaving of messages, waiting to be called, and dying for a gin we found that the concert was taking place on the other side of Montpellier. Oh goody... I was wearing heeled boots and we had come into town on the tram, so no cosy car to transport us there in comfort. There was no way we were going to trek over there, so we took our leave of the RA and walked purposefully to The Shakespeare, a John Bull pub. As luck would have it, their Happy Hour was on until 8.30pm so we were able to order a couple of pints for the price of a couple of halves! 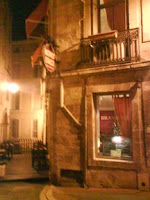 Feeling more serene after a pint, we headed off in pursuit of dinner and walked around for a bit until we hit on the Bistro d'Alco, just behind the Prefecture. What prompted us to try it was the fact that it is in the Guide du Routard 2007, and last year too. I have never been disappointed by a Routard recommendation; they are always good value and have delicious food.

Within the stone walls of the 14th century building, the ambiance was warm and welcoming as the owner, Christophe Dion, invited us to take a seat upstairs. A hard-pressed, but pretty waitress greeted us and showed us to our table. Nearby a smoker was indulging his disgusting habit so I asked for a non-smoking table, but was told that there were none, and downstairs they had been smoking too. Ah. Still, the smoker was finishing his meal and would soon be no more than a bad smell, so we grinned and bore it.

The menu came to us on a blackboard, 14€ for an entree plus main course, or main course plus dessert - super value for dinner! I chose the smoked salmon marinated in honey and ginger, then the petites seiches cooked in persillade. The salmon was delicious with the unusual blending of the honey and ginger. The seiche were tasty and copious; too copious in fact and I had to leave some. M Dion asked me why, and I had to tell him it was not because I didn't like them but because I was only small and the helping was big. He was happy with that... Behind me, a lady had picked the rognons de veaux sauteed in cognac, and served in a cream sauce. In true bistro fashion, M Dion appeared with gas ring and wooden planche full of everything he needed, and proceeded to cook the kidneys there and then. I couldn't help but observe the goings on, which happened with much badinage and expertise.

Our table was, in theory, a table for four, and soon we found ourselves practically sharing the other half with another couple. If we had wanted an intimate dinner, it would have been scuppered at that point, but as we were talking in English, we managed to give ourselves the impression of privacy. They were very nice, the other couple, so it would have been churlish to complain.

Some of the other diners are worth a mention. There was a young lady with two nerdish young men, one of whom sent back his crème caramel because the top was too burnt, he said. I thought I heard the word 'carbonisé' being bandied about I'm sure, so M Dion whisked it away to de-carbonise it...

Another couple fascinated me, or rather she did. Her hair looked totally unreal. It was very dark and very thick and looked remarkably like a wig, but a bad one at that. The general clientele was fairly young and were quite happy to comment to one and all in participation of events such as the carbonised crème caramel. M Dion, himself enjoyed sliding down the banisters of the stairs, while the waitress I'm sure must have thighs of steel, so often does she go up and down the stairs.

All in all, a pleasant place, with bags of ambiance, friendly staff and a dreadful paint job on the walls. It doesn't leave you unmoved!
Published at 8:44 pm