If I ever came to wonder what happened to my days - where did they go - I could just think back to days like today and it would all come flooding back.

After a doctor's appointment, we went to participate in my youngest's school carnival. The theme this year was 'Asia' so he wanted to wear his brother's judo outfit which made sense, at the same time carrying his wooden rifle and two pistols which made somewhat less.

We had a band to accompany us; one of those typically French wind groups which combine a decent sound with a merry approach. They played mostly dixie jazz which went just right with our strolling through the village. Not Asian, no, but you can't have everything!

Many of the parents were disguised, but not me. There's a limit to what I can dredge together at the last moment. Anyway, I'd completely forgotten that parents also dressed up, and have nothing dress-up-able. 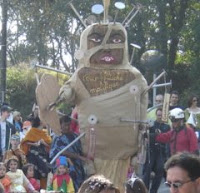 We were also accompanied by a 'fetiche de guerre' which was dragged and pushed precariously up the steep hills and down again. It was burnt at the end in the sandpit. UK elf'n'safety would have had a fit. No barriers, alcool à bruler poured all over it to get it going, and kids milling about only under the responsibility of their parents (and we know how dangerous that can be!). Luckily I filmed it with my camera because my youngest was off playing shooting his pals when the beast was set alight.

Having been busy all morning, it meant we had to go shopping after lunch, something I hate doing as I feel full and food disgusts me. Result, we bought almost nothing.

Then we had a book launch to attend at the Vieux Pressoir restaurant in Prades-le-Lez. It's one of our preferred local feeding holes, and I hadn't realised that such other activities went on there too. The book, 'Il était une joie' by Bernard Durand was being promoted by the author himself and his wife, with nibbles and champagne. I haven't read the book (yet) but it's about the family's loss in a car accident of their youngest son who would have been 22 now.

It wasn't a miserable event despite the sombre subject of the book and we enjoyed meeting the author and his wife. I plugged Promo'Arts, the blog when asked if I wrote. I wasn't going to start wittering about my book. Writers dread that! But I did feel they might be interested in our association and even attend our May 22 charitable event. Actually, I even suggested that M Durand might be interested in blogging, and waxed lyrical about how easy it is to get started. He was wary, but I could tell he was dying to join the blogosphere!