Today is Father's Day and we decided to go out for a picnic, the boys being, suitably, with their father, leaving the way open to make such decisions without risk of moaning, whinging or sulking. Not that they don't like going off on adventures, but they prefer to do it under their own steam, with their friends.

So, where to go? Yesterday, I had a browse around the internet and came up with a lovely photo taken from St Laurent le Minier in the Gard, not far from Ganges. It looked just right with lots of sunshine, rocks, river, old bridge and happy people having fun. Waking up today, clouds covered the sky and it looked ominously like rain.

Still, being British, with memories of sitting in the car at the seaside looking out onto torrential rain lashing the sea whilst eating sandwiches with the windows misting inexorably up, we decided to go anyway. We packed a nice ploughman's lunch with crusty bread, cheddar, tomatoes from the garden, Branston pickle, pickled onions, sweet onions of Lezignan, rosé wine and crisps. You might think that living in France with all the wonderful cheeses on offer that it was a disgrace that we took a nice lump of cheddar, but quite frankly, you can't make a ploughman's with French cheese. That would be a 'déjeuner du laboureur' which doesn't have quite the same ring to it, does it?

Off we set, the clouds getting heavier and darker as we made our way inland and towards the Cevennes. Arriving at Ganges, we crossed over the river towards St Laurent le Minier and about 5km later came to a lovely bridge with people standing by their cars talking and looking at us. We went past them, not really realising that that was THE spot, and drove on into the village. It was a bit depressed, as well it might, as the zinc mines closed down just after the Great War. The general air of abandon wasn't helped by a steady dribble of rain, so we went straight through and came out the other side back to the main road. 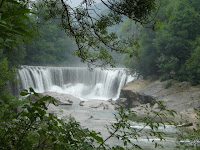 Driving back, we came to the bridge again, and the people not being there to stare, decided to stop and have a look. The rain also stopped, which meant we could get out and discover, to our joy, picnic tables and a fantastic view. We took the driest table and set out our lunch under the trees which provided enough protection from any slight downpour.

Looking around, we noticed some young folk taking close-ups with super cameras (they had big flashes...) of various natural features. The rock formations there are very interesting, made up of layers which have been eroded into platforms which would be great fun to jump on when the water goes down. 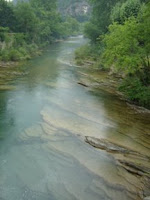 We watched an extended family over the other side of the river come and set up camp. Considering the weather, they didn't seem to be awfully bright as they spurned any form of cover, out in the open. It took them about ten minutes to lay out all the floor covers and bits and bob, set up the barbeque and start cooking.

Then it started raining again, unsurprisingly. They braved it out for a while, then gave up and started the task of gathering everything up and taking it to a spot beneath the trees. I don't quite know when they were planning to eat, because it was by now gone 2pm, and the tiny barbie wasn't even smoking, and there were at least 10 adults, with half a dozen kiddies! 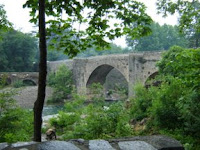 We thought we had arrived late at around 1.15pm, but with the extended family, there arrived quite a few other groups/families trying to find a spot to set up their picnic. Some sat under the arches of the magnificent bridge and aquaduct, others joined us at the picnic spot where there were 3 other tables. Eventually, we had finished and felt sorry enough for the people at the next table trying to light their disposable barbie on the only remaining table which was exposed to the elements, and packed up our things. 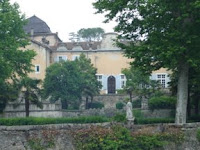 We mooched across the bridge to take in the views, and to the pitter patter of rain on the camera, we headed back to the car and left the brave picnickers to their fate. I did manage to get a picture of what I imagine was the former mine owner's chateau and very nice it looked too, if a little worn.

As a picnic spot, St Laurent le Minier is fabulous, although I imagine it gets pretty busy in the summer, and the waterfall is much less impressive. Definitely one to go back to, though, and comes highly recommended.
Published at 5:09 pm