The trouble with children is that they keep growing and keep getting older. It's a challenge keeping up and I'm sure many parents of very small children don't realise what their kiddies are capable of because they are not aware their child has moved on.

When the boys were small, I was working and they both had to go to the crèche. Professional child carers are much more alert to the progress of their charges because that is their job. I remember being amazed at what the boys were able to do at various stages simply because in my mind I had not got there yet for them.

That was several years ago, and the boys are now pre-adolescent, and just about to start CP. My eldest will have serious work to do at home. Up until now, he's done all his homework at étude. Why did I make him stay at school to do his homework? Simple. He was so odious about doing it at home that it ruined the entire evening for everybody. He would rather play than work and even though I suggested he do his work the minute he got home to liberate him for the evening, he just couldn't drum up the self-control. Home is where you hang out and have fun.

I choose my battles, and this one was won all round by him staying, with much of the class, for an extra 45 minutes after school. I got the feeling I was not the only one fighting this battle!

As ever, though, he is growing, and will need a desk this year. I browsed the internet and found a very snazzy corner desk in Fly. I went down there after work yesterday and got the desk, a chair and a lamp. Today I put it all together.

I was a bit apprehensive as I am a seasoned Ikea shopper and some of their furniture is the very devil to put together. My kind neighbour had helped bring the desk box in last night and left it downstairs, so I opened it and took it bit by bit up to my son's bedroom. Taking it slowly and carefully I followed the instructions. They were very clear except for one thing. You couldn't tell when to use the underside of a shelf, so twice I had to undo what I'd done because I had used the wrong side. 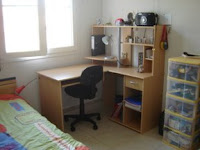 It takes, according to the instructions, 1hr45min for two people. I started around 9.30am and by 10.30am had done the first side. By 12.30 I had finished, but I had had a coffee break in the middle. I put the chair together after lunch, tidied everything up and Ulysse (the cat) and I admired my handiwork.

Children may surprise me with their constant progress, but I'm also pretty impressed at my own.

I'm considering letting my eldest use the internet phone (once I buy it...) to keep him off the land line, with strict instructions not to use it to call mobile phones. I hope he'll like that idea. Of course, if he abuses my instructions, the phone will simply be removed. He might be growing, but I think I'm ahead on progress...
Published at 3:43 pm