It's Mother's Day here in France today - la Fête des Mères. To celebrate, it poured with rain for most of the day. Anyone hoping to have a lovely picnic would have been sorely disappointed. Anyone hoping to eat al fresco at restaurant in the sun would also have had to turn to Plan B.

I took an executive decision yesterday to adopt Plan B and bought accordingly. Plan A had been to take a picnic and eat it whilst watching my youngest play footie in his footie tournament. Plan B was much better in fact - eat at home in comfort, with a decent meal and a bottle of Veuve Cliquot.

As I have no partner to jolly the boys into making my breakfast or do anything in particular, I just had a lie-in and made my own brekkie. I think that this year I'll teach my eldest to make a mug of tea, and train him to carry it without incurring second degree burns, so he can make breakfast for me next year.

I had done the cleaning yesterday, with much bad temper I might add. I'm not one of nature's joyful little housewives and the first thing I would do if I had the money would be to get a cleaning lady.

Anyway, today I could concentrate on lazing about and then getting down to lunch. My youngest is a keen cook and, being in my good books because he gave me a nice little pressie that he'd made at school, was allowed to help me because he's actually a pretty good helper. My eldest just gave me a kiss and settled down to watch more tele. I had to shout at him to turn it off so he stomped off upstairs.

We were to have proper prawn cocktail, and scallop risotto. My youngest saw the prawns and told me that he and his brother didn't like them. "What day is it today?" I asked him. He had the grace to smirk. Bugger me if I'm going to cook for them on MY day. Good grief.

NG joined us for lunch as her son is a hopeless twat who didn't even send her flowers despite my hinting earlier in the week that it was Mother's Day and if he wanted me to get some flowers on his behalf to let me know. He didn't even reply to my text message. There's another who thinks a kiss via the phone is sufficient. She gave me a beautiful brooch as a pressie in just the colours I wear that had been given to her many years ago.

Happily, lunch was lovely. The prawn cocktail was yummy, the risotto, taken from my Harrods' cookbook was divine - I added some mussels and used the juice from cooking them as stock for the rice - and we finished with strawberries from the garden with proper chantilly cream made by my eldest. All washed down with Veuve Cliquot because if we don't buy it to spoil ourselves you can be sure no one else will, and I detest cheap 'n' cheerful champagne. 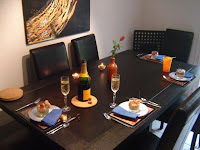 We ate off my new table and it looked rather fab. The rose came from Intermarche as a pressie from the shop. It's in what used to be a beer bottle. Handy, huh?

After lunch, I went to have a nice snooze, joined by Ulysse who is, in fact, still in bed... The weather perked up just enough to let the boys dash outside to work off some energy.

As Mother's Days go, it was all rather pleasant and I'll definitely do that risotto again. It was very tasty and very simple to make. A perfect dish!
Published at 6:39 pm