My youngest is on a mission - he aims to visit all the ruined castles in the area.

Yesterday, being a lovely day, we decided to take a picnic and head out west towards Gignac. Just before St Paul et Valmalle, we left the motorway and drove to the commune of Aumelas. There, on the hill is the Château d'Aumelas which is a splendid ruin.

He had found it in my book of local walks, so all we needed to do was to find the starting point. Easier said than done, but in no way surprising for this book which has to be the worst book of walks ever written. It assumes that you buy the IGN map that goes with the area, but as these are quite difficult to come by, one has a tendancy to find oneself just relying on the descriptions in the book. To one's cost.

Invariably I get lost, and yesterday was no exception. The only difference was that I couldn't even find the starting point! Driving around getting more and more irritated, I finally decided to give up and just find a likely track. Needless to say, the castle isn't signposted, but you can see it quite clearly from the valley. The trick is to find a path up! 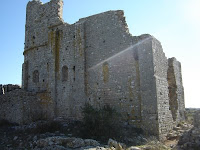 I made it, and we managed to push our bikes up the hill onto the plateau. It was not the best route, but once up, I saw plenty of likely tracks that we could explore after lunch.

My youngest was ecstatic at the prospect of all the exploring he could do, and set to it straight away despite my rumbling stomach. I let him have a good run about amongst the ruins, and then called for order, and found a nice sheltered spot in the sun for lunch.

I don't know why, but I'm always surprised when I see other people at these places. For some reason I expect the ruins to sit proud in solitary splendour, and to have it to ourselves to explore as temporary masters. 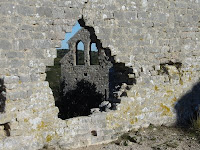 It's a terrific one to explore as it's big with lots of ruins to climb on, look through and crawl into. The weather was glorious with a blue sky and amazingly warm sun considering that it's November. I was out in my tee-shirt after the exertion of climbing the hill.

We then went and did some mountain biking on the tracks of the causse (plateau). They were large enough to allow emergency vehicles through in case of fire, and were fairly flat, being on the top of the plateau.

My youngest is a member of the local VTT (mountain bike) club and has learnt how to ride, go down hills, change gear and other technical aspects of biking. He is now much more confident and fairly tears along. 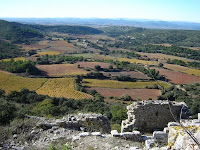 The view from the top was a magnificent panorama that stretched west as far as the Plateau de Larzac, with the autumnal vineyards glowing gold and red in the sun depending on the variety down in the valley.

The dungeons lurked in the depths of the ruins, no longer scary with piles of rubble where miscreants crouched previously. Secret passages connected one bit of ruin to another, my youngest finding them all and calling out his discoveries.

When it was time to go, we took the same path down, by bike. I was amazed at how my youngest attacked the stony slope with confidence and expertise. I followed at a more sedate pace, not having taken a course, and not entirely confident about what I was doing. 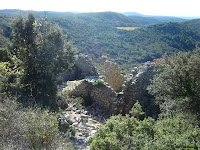 However, we arrived intact, our arms a blubber of crazily shaken muscles, and sat for a while to let them recover.

I now have a vague idea about where the path should have started, and do actually intend to buy an IGN map of the area to show where all the tracks lead. It's a terrific area for VTT what with being pretty flat, with fabulous views, and a huge area in which to cycle.