Saved by the Bin 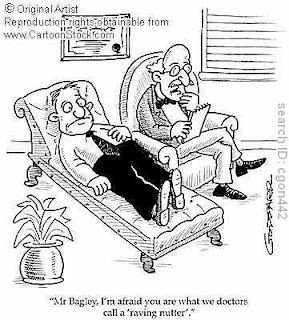 There are various types of nutters - you name it, some extremist somewhere exists and is hell-bent on devoting all his/her nuttiness to overdoing whatever happens to be their dada.

Religious nutters are amongst the worst and there's one making the news in France at the moment for starving his 8 kids almost to death. This Franco-Moroccan muslim man and his converted to Islam French wife live down in the Pyrennees-Orientales, in Banyuls-sur-Mer, better known for its sweet aperitif wine. They brought up their children according to the strictest Islamic education.
Apparently, his wife considers him an 'illuminé' but as she sounds as crazy as him, her opinion is somewhat dubious. Mind you, this guy does sound genuinely crazy.
Other guys cultivate being 'illuminé' to set up sects so that dirty old codgers can have sex with/marry young teenage girls and get loads of money into the bargain. Alternatively, they could go and live in Afghanistan where 80% of brides are under the age of 15, and men hang on for dear life to controlling women through bullying under the guise of religion. That's a load of tosh, natch, they just want to be waited on hand and foot, and just think about themselves all the time. Religion is a convenient excuse.
Religion is also the excuse for starving 8 children almost to death, to purify them. There was no malicious intent here, just a crazy interpretation of some religious text. You might wonder how social services managed not to notice that these kids were not at school, never went to the doctor and were kept inside with the kitchen door barricaded.

It was only when one of the boys, aged 16, weighing 32kg was seen rummaging inside rubbish bins with blood on his face because his mother had beaten him for stealing a pinch of sugar that someone called the police. It seems that social services everywhere are blind to the most obvious abuse. It's not like they had not visited the family before - they had, in 2004, but had given a 'non-lieu'. Amazing.

The father is trying to say that it's because they had no money that he couldn't afford to feed the family, but everyone knows that with 8 kids, he could get a ton of money from the Allocations Familiales, plus the RMI because he's not earning much - he's some sort of wandering salesman going from market to market. His wife is French; if she didn't know that, it's sure proof that she's insane too.

So the money excuse is baloney. What he really believes is that he was purifying his children through starvation. Himself too, mind. He didn't reserve purification for his kids - he is also nothing but skin and bone. Three of the children are now in hospital with severe malnutrition and the others have been taken into care. JUST IN TIME by the sound of it, or we'd be reading about the tragedy of these kids' deaths.