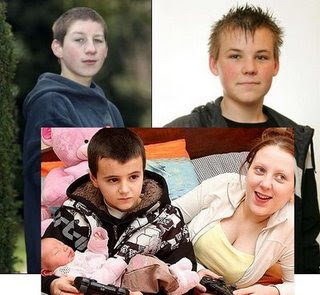 Alfie Pattern, the kid who thought he'd fathered a child at 12 has found out that he is not the dad. No surprise there.
No surprise either to learn that Chantelle had not been telling the truth when she said she was a virgin and that Alfie was her only boyfriend. Unfortunately for her, five other boys came forward and said they had slept with her in her bedroom at night with her mother's knowledge.
It was somewhat surprising then that Chantelle's mum also said that Chantelle was a virgin when she bedded Alfie. The concept of truth is obviously hazy in that family.
So who is the proud father? Another kid of 15, Tyler Barker. He'd suspected it might be him apparently as he'd kept track of when he and Chantelle had slept together. Surprisingly, he did consider the idea of birth control, but assumed Chantelle would take the morning-after pill. There's nothing like experience to teach you bitter lessons. He now regrets he ever met her.
I'm sure they can all take heart in the knowledge that they've all become celebrities, however. This is something which some people seem to strive for despite having no creative talent. These days you don't need talent, you just need to be infamous. I'm sure Alfie has a great future ahead of him appearing on reality shows of varying crassness.
Chantelle is less fortunate. She's now known for being the National Slut which makes her very upset, but hey, you can't have everything, can you? I'm sure The Sun is keeping her in condoms and nappies nicely, so a little infamy is nothing compared to all the attention and national celebrity, is there?
And I expect that Maisie will grow up just like her mother, as Chantelle is like hers. RDV in 15yr's time...
Published at 9:08 pm