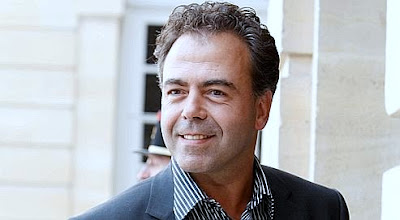 Whither swine flu in France? Well it's here, natch, but it's kept pretty hush hush as to who's had it, I suppose to keep the population in a state of either suppressed hysteria from lack of information, or indifference... from lack of information.
Indifference seemed to be winning the day when it was announced that schools could be closed for 12 weeks if things get nasty. Luckily most people are on holiday and haven't heard this yet or I'm sure there'd be more than a little unsuppressed hysteria.
Luc Chatel, the French's very own Minister of Education, and closely related to Ed Balls by the sound of his idiotic pronouncements, thought he'd cheer everyone up during the silly season with this information. It's true that August has been decidedly serious what with deaths, fires, imprisonment in a Iranian prison (Clotilde Reiss) and toxic seaweed - and that's only in France - that our Luc thought it was time to have a laff.
He therefore put on his best joker's hat and had a jolly interview with le Figaro. They don't call swine flu grippe du cochon here, they call it, boringly, grippe A or H1N1 - equally unevocative. I suppose that's so we don't all get carried away with exciting headlines. The French do like to keep things terre à terre.
Anyway, he said while it's important not to dramatise things (ha!), we mustn't minimise the situation either. To help us not minimise things, he's produced a 4-page booklet to educate us all on those important actions (catch it, bin it, wash it). I'm not sure why it takes 4 pages to say attrappe-le, jete-le, lave-le, but I suppose that's why I'm not in the government and Luc is.
Just in case there is a pandémie and the kids are all sent home for months and months, they shouldn't think it'll be all party party, we're off school, yippee, come on mum let's go to the swimming pool. No way! The government has been busily preparing lessons by television and radio just in case! There's organised for you! Funnily enough, they way may well be better done than those prepared by uninspired, depressive local teachers simply because, under national scrutiny, they'd better be presented by the best available. The problem of who will be looking after these children for 4 months, of course, has not been addressed. Neither has what will become of the economy if one parent has to stay home to watch lessons.
Figaro's readers are very concerned that if schools do close, teachers will not be able to strike or take time off for sick leave. It may even be illegal, denying them the right to strike. What to do? They also believe that children will do a lot better if taught by television minus uninspired, depressive teachers, which says a lot about French general attitudes towards their own education.
One reader, a doctor, did rather spoil things by writing in and saying that he's seeing one or two cases a day of this, not grippe, but "grippette". He says that what he's been treating is not serious at all, and his patients recover after a few days.
So, while Luc is doing his best to wind everyone up and strike fear into our hearts, you can rest assured that Figaro readers are having none of it and are taking the piss with true revolutionary spirit.
Published at 4:52 pm