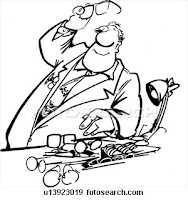 It is no small wonder that the brightest most dynamic of French youth is leaving France to set up businesses elsewhere when you read about the protectionist practices combatting the development of internet e-commerce.

A number of business secteurs are resisting the rise of e-commerce, according to Le Figaro. These include alcohol, tabacco, gambling, medication, perfume, cosmetics and produits de luxe. Among the spurious reasons cited are regulations linked to health, and consumer protection. The main reason, however, seems to be lobbying by professionals who do not wish the inconvenience of e-commerce competition.

Brussels has waded into the battle ordering France to authorise the online sale of glasses and contact lenses. Glasses in France cost an absolute fortune. Opticians have decided amongst themselves to maintain a certain level, to the extent they can offer a second even third pair for a mere extra euro. Profit margins are obscenely high and it costs the Secu and mutuelle insurance companies just as much in reimbursements.

You would think the insurance lobbies and Secu would be backing lower prices and internet sales. French law stipulates that the sale of health products online is illegal. Brussels ordered France to change the law back in 2008, and since then it's all a bit of a legal mess.

Since internet suppliers of optical equipment cannot be based in France, they set up business in Germany or elsewhere in the EU. According to French law, if the regulations are followed, clients should be able to be reimbursed by the Secu for glasses bought anywhere in the EU. Some mutuelles are apparently refusing to reimburse the top-up but this is against the law.

The main problem is that by maintaining a false set of protected circumstances, France is putting off the inevitable, but also preventing French start-ups from developing an e-commerce and creating jobs. Meanwhile, foreign start-ups are doing just that, and will be there ready when the protectionist wall finally comes tumbling down.

It's a short-sighted blinkered approach that will hurt that much more when the day comes to expose the highstreet to glaring floodlights of online competition. It's what's known as entrer dans l'avenir à reculons as one Figaro reader put it (going into the future backwards). It's particularly unfair on young businessmen and women whose hands are tied while those in comfy positions thwart their every attempt to share the cake. Maybe the young are expected to know their place and stick to odd job auto-entrepreneur petit boulots until the fat cats hit retirement.
Published at 5:25 pm