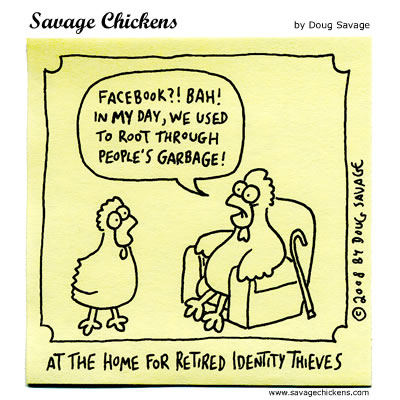 My youngest and I have  a new hobby - shredding. My TWDB brought back his shredder from his des res in Nice and it found its way into my house and hasn't made it out again. So we have been succumbing to the joys of shredding.

Of course there is a very sensible and rational explanation for having a shredder, and that is to destroy unwanted letters that allow you to apply for credit and give all sorts of interesting and useful bits of information to those intent on id theft. A quick rummage in your average paper bin could reveal numerous opportunities to get your mitts on someone else's credit. Added to that all that loosely contained info on Facebook (not mine, mine's tip top private!) and the world's an id thief's oyster.

I've never really worried about it before. I know my mother has a shredder because there was quite a lot of scaremongering in the UK a while ago, probably inspired by the manufacturers of shredders, and she bought one along with most of the population. Here in my quiet little spot it's difficult to imagine someone diving into our communal paper/plastics bin to fish around for unused credit card applications, but I was surprised to hear that last year there was a wave of Eastern European thugs breaking and entering into some of the bigger houses around here too so I suppose nowhere is safe!

You'd have to be pretty determined as an id thief though, wouldn't you? I mean, that bin stinks - people don't always wash containers out so there's sour milk bottles, yoghurt pots, oily pizza boxes etc. You'd haul yourself out and attract immediate attention (although at 3am I suppose there's not much immediate attention to attract, unless it's a Saturday night when the joint is jumping... haha... but you never know...) by the sheer pong on your clothes. I suppose id thieves don't fret about dirty cars either (especially stolen ones).

Still, you can never be too careful (well, you can, just take a look at 'elfansafety madness), so my youngest and I have taken to shredding every spare piece of paper in sight. I'm convinced we'll end up shredding something which we shouldn't have and then spend the next 5hrs digging it out of the bucket and sticking it back together again. At least it would be a relatively creative way to fill a dark winter's evening. Come to think of it, someone's probably created artistic ways of using shredded paper inspired by just such a catastrophe!

Talking of art, I popped into the local Christmas market which was on yesterday. I may have already said that I'm skint at the moment (hence obscure new shredding hobby), so I wasn't looking to buy. I don't usually find stuff I want to buy anyway. A lot of it is beautifully done, but it's still stuff; stuff that takes up space, has to be dusted, found a home for, perhaps a use for and may end up at the back of the recipient's cupboard.

I was more interested in the local honey and posh olive oil, but I don't spend €25 on a bottle of wine so I'm buggered if I'll spend it on olive oil! I mooched around dying to take a piccie but not daring to get out my camera. Eventually, after about 10 minutes, I'd been up one side of the marquee and down the other, seen everything, said hello to one couple, told one guy I didn't want to try his cheese because I'd just brushed my teeth (true) ("I've never heard that excuse before," said he, cheeky sod), told my youngest to be careful with his skateboard inside ("of course I will mummy!") and went home. So much for supporting local artisans.

To celebrate my restraint I shredded a paper from the CAF and three from social security itemising reimbursements. Hah, take that! I said to imaginary id thieves. Just for good measure, my youngest shredded some old school canteen tickets to confuse the buggers even more, and then swished the papers around in the bucket. Ooh, we know how to enjoy ourselves and thwart a thwief!
Published at 5:27 pm