It's been a good year for primary school shows, for once. A couple of weeks ago we had my youngest's class put on a little show based on the year's work in theatre/dance, French and music. A few weeks before that he was in a series of sketches written to underline the importance of safety at railway stations. It was a regional competition and his class won. Parents were invited to a performance of the winning show. 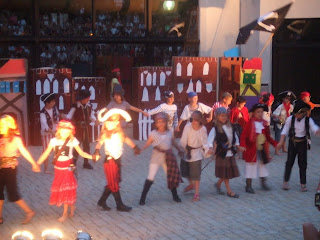 Last night his school vied favourably with the final of the French X-Factor (between Brit Matthew and sassy Marina - he won) to put on a show where all the classes participated in a coherent storyline. This sort of event usually lasts for hours. There is a theme and each class has to perform, dressed up accordingly. Last year it was the Planets and we saw kids prance around being Venus, Mars, etc. It was tedious and annoying.

I don't know what came over them this year, but instead of being subjected to a long drawn-out series of whimsical nonsense, there was a proper story and no wimpishness. Amazing!

The story started with the kiddies of the maternelle. A king and queen were out riding one day and came across an abandoned baby girl. The king took pity on her and decided to rescue her and take her home. A few years later he died and she was left to the mercy of her cruel step-mother, but was entertained by small creatures and birds who did all the dusting, cleaning and sweeping.

Then we saw the start of the Mowgli story - he was found as a baby by a bear and was brought up by the animals of the jungle. Unfortunately he had to fight the tiger, won, and decided to leave the forest because he knew the tiger would never cease to try and kill him. Three fairies visited the children to tell them they'd be attractive, go on a journey and meet a prince/princess.

At one point the girl was stolen by pirates, rescued by corsairs and attended a ball where there was courtly dancing. Then things moved to the city to a West Side Story theme of dodgy types (my son's class) and hippy types. The two groups ended up fighting to the music of WSS.

Eventually, Mowgli and the princess found each other and fitted their two talismans (two sides of a broken heart) together, and had a party to celebrate their success.

It lasted an hour and a half, was slick and well produced and the kids had been drilled to within an inch of their lives so it was a pleasure to watch. The amphitheatre was packed with parents of all types from nut brown skinny women to paler (working) men, the glamorously dressed and ones in shorts and tops. For once, I didn't feel like I needed a constant supply of rosé to keep me going.

This will be a hard act to follow, and as the head is leaving along with 2 other stalwart members of staff, I'll be interested to see what they produce next year. One thing's for sure though, this will go down as a vintage year for interesting, snappy, short performances. I never thought I'd see that.
Published at 4:23 pm