We've just come back from a week's camping (in a chalet) at the Lac de Villefort an hour or so north of Alès. The best bit about the chalet was the all-in-one hob-oven-dishwasher. Yes, a dishwasher! Luxury!! The other best bit was the view (or vice versa):
I think you'll agree that that's pretty stupendous. The camping is practically invisible from the other side of the lake (hint, the blue stripe bottom left is the swimming pool).
We visited, or rather saw, several castles. We were not able to visit all of them - this one, the Chateau du Cheylard at Aujac because it was closed on Mondays, and we didn't notice this important piece of information on the board at the bottom until we'd climbed a couple of kilometres in 32°C heat to find the closed gate and another notice.
This one, the Chateau Bresis because it's on private land and although we were told that theoretically no one can stop us visiting an historic monument, we decided not to bother trying just in case the owner came rushing out wielding a shotgun...
We got to this one, the Chateau de Castanet a bit late in the day and decided not to hang about mainly because it was not a ruin and my boys greatly prefer clambering over old stones than looking at rooms of furniture and exhibitions, and also because it was windy and pretty nippy out, and the car was a lot more inviting.
I discovered that on the map there are a number of symbols for castles. The most promising ones for us indicate a decent ruin in a triangle of three black circles. A totally ruined ruin has a triangle of white circles and, from experience, is so ruined that it's little more than a pile of stones. Inhabited castles come in the shape of a rectangle with little lines poking out of each corner.

La Garde Guerin offered a good mixture of ruins and restored buildings - this photo was taken from the top of a very windy tower.
We ended our castles visiting with the Chateau d'Allègre where they were having a medieval fair, with the usual armour and weapons displays. My youngest tried on a couple of helmets and wielded a heavy sword for effect. 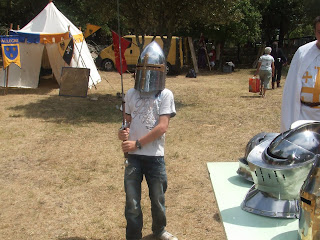 The van in the background rather spoils the effect but you get the idea. They were still setting up in fact, hence the general lack of activity.

We didn't just drive about looking for castles, however. We also did some sporty activities which I'll keep for another post. I think you'll agree that we got a good dose of castles on this holiday!