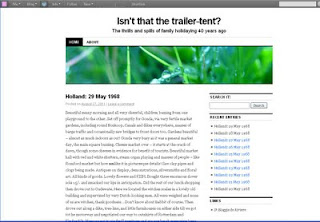 I set my eldest son a task at the beginning of the year. It was a simple task but one that would offer him some self-improvement. You might think this would doom it from the start, but I can nag with the best of them so he complied for a couple of months.

The task was to type my mother's holiday diaries from way back when we were kids into a blog. This had the advantage of getting him to improve his typing and bringing my mother's diaries into the public domain. They don't teach kids to type in France, so I've had to download kid-friendly typing software for my son to learn where to put his fingers. Then came the tricky task of practice. Practising without a mission is fairly hopeless, so I thought if he had the task of typing up the diaries, that was as good a reason as any and I would have ammunition to argue with ("come on, Nana will be so pleased...").

To be fair, he typed up several days' worth, amounting to a week's holiday, I think, then it became more and more difficult to motivate him. In the end I gave up as he was 'working for his brevet' (that was the idea anyway).

As with so many things, if you want something doing you'd better do it yourself, so I have continued with the diaries in "Isn't that the Trailer Tent?" and have finished off the first holiday from 1968 which was a camping trip to Belgium and Holland. I was four in May 1968, my elder brother just six, and my younger brother not quite one. Taking us all camping at that time before pop-up tents and ABS brakes was pretty brave, but I suppose people just got on with it as neither had been invented.

Anyway, I've timed the final posts to appear tomorrow and the day after, in a fit of technical wizardry, which recount the visit to the flower auction at Aalsmeer, flower market at Haarlem, picnics in the car in the rain (natch) and a quick dash into the Rijks Museum 15 min before the closing to see 'The Night Watch'.

I'll probably tackle the French ones next as they have jolly sketches done by my mother in them too.


* * *
On garage news, I've finished it, and will be posting before and after photos for your delectation as soon as I've got the six Peugeot 205 wheels sold off via Ebay. So it's all spick and span, together with the house, thanks to the diligent work of my cleaner AND the car! I spent part of this morning cleaning it inside and out all ready to be dirtyfied again upon the return of my two heroes next weekend. The only thing that isn't all polished up is me, but I've lost interest now so that's tough (I do that, I get so far then I lose interest...).
Published at 5:15 pm