There are people who have faith in public transport (usually those who do not use it, like politicians), and those who would rather put their hand in a mixer than rely on it utterly because they use it and know that, basically, shit happens (often). It happened to me while taking the boys by tram to the station to catch the train to Paris.  Normally you get on the tram at Occitanie and it deposits you without fuss 20 minutes later at la gare. On Friday, instead of turning right towards the station, it carried straight on, without a by your leave, announcement or any other indication of unusual behaviour.

We were not the only ones to be surprised. As we watched the line to the station disappear before our eyes, several panic-stricken folk, who probably also had a train to catch, started getting a little agitated. The tram was not going to the station, but luckily it stopped a couple of hundred metres later, and we were all able to jump out, charge across the tracks to the other platform and wait a minute for the next one back. Once we'd retraced our steps, we nearly made the same mistake twice, but a kindly lad called out that the one we were just about to jump on was not going to the station either. The next one was, however. The boys made it onto the train with 5 minutes to spare.

That was the start of my weekend motorbiking. The shit did not continue to happen, thankfully, because we were nowhere near any item that could possibly be deemed as public transportation. On Saturday morning, my TWDB and I loaded up the bike and set off to meet some friends at Cadenet.


The autoroute is not pleasant on a bike, so we took it as far as Nimes and then cut across through Beaucaire to Aix-en-Provence, and then up to Cadenet. It looks a picturesque village on a hill, and had a pleasant place where we stopped at a bar to wait for our friends. The (mature) lady doing the service looked like an old lush what with her long dyed blond hair, tight leopard skin tunic over purple knee-length leggings with frilly bottoms, and belt loosely flirting with the region formerly recognisable as her waist. She clip clopped about in mules and I suppose had a fag on the go in the bar.

Our friends arrived, and we set off for Apt, capital of glacé fruit. It was incredibly busy what with being market day, so although it was nearly lunch time, we just filled up with petrol and no glacé fruit, and carried on north to Sault. On the way there, we passed the Légion Etrangère base of St Christol which was enormous. I looked out for some hunky Légionnaires but apparently they are all in Afghanistan, so it was pretty deserted. The giant satellite dishes looked like they were working hard though.

We entered an unpromising bar for a sandwich which turned out to have a delightful terrasse on the other side, in a shady place. The surroundings were delightful, shame the sandwiches were so crap - industrial baguette and tiny amount of filling. If you wanted butter you had to order the jambon beurre otherwise you got dry bread and cheese or pork for €4. It must be a highly popular centre for them to get away with such a rubbish offering. The other eateries were teaming with bikers and cyclists. It's a popular starting point for visiting Mont Ventoux and is well-known to keen and eager cyclists who emulate the Tour de France by actually cycling all 1912m to the top (mad fools).

We were not going to do anything as energetic as cycle, but set off for the top by motorbike. Mont Ventoux is an incredible place. Topped by bare limestone scree, it looks, from a distance, like a snow-capped mountain. From Sault, it's a 26km haul up the 'easy' side of the mountain. The Tour de France, which has included the climb in 15 Tours, takes the more gruelling way up from Bédoin. 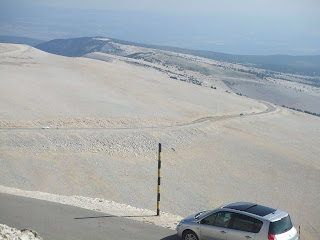 The yellow and black poles are there to measure winter snow depth. It gets so windy up there that they sometimes close the pass. At the summit, 1912m up, the cyclists were congratulating each other on the success of their challenge. They can even validate their achievement with a stamp in a special box.
Also at the top there's a meteorological station and a huge tour installed by France Television plus a radar station for aviation navigation. 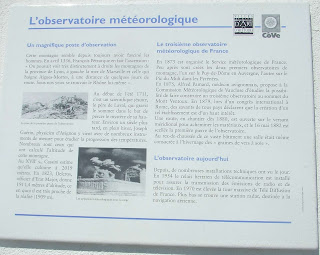 The views from the top are stunning. On a really clear day you can apparently see as far as Marseille and the sea. It was very hazy the day we were there, but we were still amazed at the splendour of the panorama. It leaves you dazed, the sheer immensity of what you can see, and from such a height looking down around at the beauty of the rugged landscape. 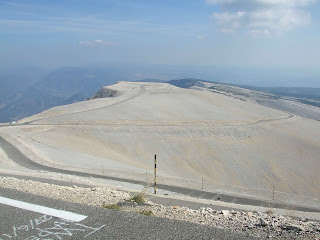 You can walk up too, the path indicated by lines of red and blue poles to keep you on the right track and away from the treacherous scree. I wouldn't like to think in what state you'd arrive if you lost your footing and went hurtling down the mountain. The sharp limestone rocks are a more perilous surface to skid down uncontrollably than grass or snow. 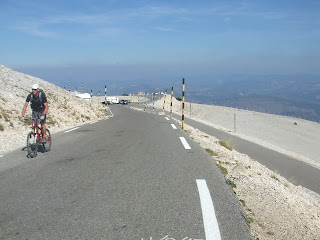 We made our way down on the other side of the mountain, me hoping and praying that the brakes would not fail and wondering if I could jump off before the bike went plunging over the edge. I have such an over-active imagination. I decided that I couldn't as I wouldn't be able to clear top case which would push me over too, so I just had to rely on my TWDB not losing control of the situation. Of course, I shared none of these doom-laden thoughts with the driver, not wishing to distract him from the task in hand... The bike performed brilliantly, as always, it's an incredible piece of precision engineering and computer-enhanced controls.

Back down at the bottom, we passed various picturesque villages set on hillsides, the odd one I managed to snap from the bike, which explains the prominence of the lamp post in the picture below. I was rather taken with the ruins of this one, my youngest would love them. 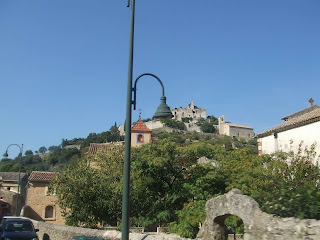 Mont Ventoux is a prominent landmark, visible for miles around. Looking back towards the woody side of the mountain, it doesn't look quite as dramatic, but it certainly stands out. 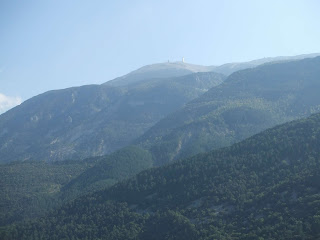 By this time, we were starting to wonder about where we would spend the night. One delightful-looking place, in the Guide du Routard for the last 6 years or so, was full, unsurprisingly as it was in one of the hill-side villages and had panoramic views from the bedrooms. The food was recommended in the Gault Millau guide too, so we will have to return...

We continued on to Buis les Baronnies where much frantic telephoning from the Tourist Office resulted in finding two rooms which were available at the Hotel Sous l'Olivier. Other places would doubtless have been more charming, but this one was within ten minutes of dinner by foot whereas the others meant taking the bikes and thus limiting the delights of the local wines. We finished off a perfect day at the Brasserie l'Escale where we were agreeably surprised by the quality of the cooking. It was recommended to us by the young proprietress and she was spot on. I had a tender, tasty lamb chop, my TWDB had a sumptuous 5-cheese calzone, and the steak of our friends was fantastic too. The rosé was excellent, although the red and white wines were somewhat average.


The hotel was located next to a burbling stream, which made delightful music all night. I would have slept better had not my extra blanket that I'd fortuitously taken from the cupboard to keep me warm as my TWDB wanted the door to stay open, was nicked during the night by said TWDB, so I ended up as cold as I thought I would be if I hadn't taken the extra blanket.

He was not popular.