In and Out of Austria

"Bikers Welcome" read sign after sign, on hotels, pensions, gasthofs. We could not be in France though. Bikers in France are not welcome in many places. They are tolerated because they spend money - the average age of a biker in France is 44. At that age, people have money to spend on a good bike, nice hotels, restaurants and equipment.Are you welcomed with a garage to house the bike and a power hose to clean up after a hard day's drive? No. For that you have to go to Austria, Switzerland, Germany or Italy.

Germany has a very successful motorbike industry. BMW is making huge profits from its motorbike production - the GS1200 is one of the most widely sold bikes in the world. As a result, bikers are recognised as a real market and are treated well. You don't get suspicious looks when you turn up with a helmet, you get "Will you need a garage, sir?".

We have just come back from a week of fantastic scenery, thrills and spills (not literally...) in and out of Austria, popping into Germany, Italy and Switzerland. Our base in Austrian Au (there's one in Switzerland and also one in Germany!) is a long way from Montpellier - 750km. The bike was driven in style on a trailer so we could concentrate on being there rather than getting there. 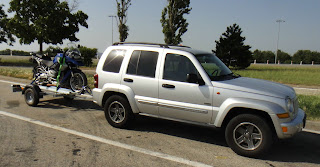 At our first port of call, a 4* hotel - the Alpen Hotel Post, Au - was just what we needed after leaving Grenoble and crossing Switzerland. The Swiss had charged us twice for the autoroute vignette - once for the car and once for trailer - 70CF, and given change in useless (for us) CF for Euros spent on an expensive couple of sandwiches. We were happy to leave and enter Austria, land of the Euro and no charge on credit card transactions.

In all our hotel rooms, we had single duvets on double beds rather than double duvets, and they were always nicely folded. The most original folding was in the Alpen Hotel Post rooms.

This was the view from our bedroom: 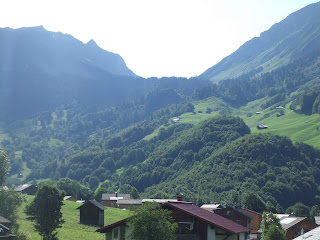 We enjoyed relaxing in the warm waters of the inside hotel pool and cosy pool nook, had a delicious dinner with a nice Austrian rosé - only one on offer, but it was very good followed by some gorgeously strong Räss cheese, and slept like logs in the comfy bed. The staff were dressed in traditional costumes and were helpful and friendly.

The next day we left both car and trailer snug as bugs in the garage (car €5 per night, trailer free) and rode off with a light heart and a bag of sandwiches made sneakily from goodies selected from the copious breakfast buffet.

The aim of the holiday was to ride over as many mountain passes as we could including the famous Stelvio Pass; visit the Dolomites, and stay in places like Cortina (Italy). We headed east, popping in and out of Germany (my phone buzzed busily in my pocket as Orange told me I could count on them to make calls each time we crossed a border), passing through Garmisch-Partenkirchen which was absolutely full of BMW bikers. We were not surprised to see that BMW Motorrad had organised a weekend meeting and this delightful town was awash with GS1200s. We felt very at home.

Our route took us into nature reserves where we rumbled through this bridge (Bridges of Madison County anyone?): 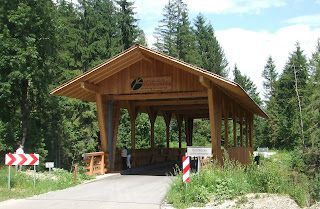 with views of Alpen scenery like this (taken from a moving bike hence blurred grassy foreground): 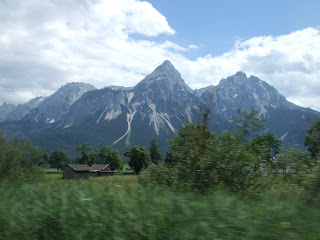 We had previously made a hotel reservation at Reit im Winkl, a small Bavarian town not far from Salzburg, and had to plough on until we got there, some 400km from Au. It was too far really and made for a very long ride thus missing out on seeing some of the more spectacular Bavarian castles, and we should have cancelled - you live and learn (except we tend to fall into the same hotel trap a bit too regularly - booking when we don't need to!).

Upon arrival we found that it was a modest (bikers welcome) establishment and a bit poky. Dinner was excellent though. I had a Weiner schnitzel (as you do, being in the region) and roast spuds to die for. That evening we warily watched a storm develop as we dashed out to a cash-point as they only took cash (!) and then watched it crash from our window which, in the event, turned out to be a regular occurrence.
To be continued.
Published at 5:42 pm