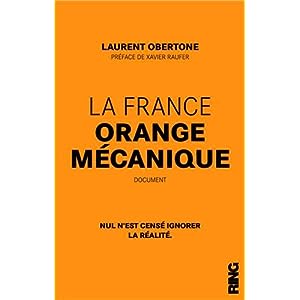 I'm reading La France Orange Mécanique ('Clockwork Orange France') at the moment and I can tell you it makes scary reading. The scariest chapters so far have been the ones on the justice system. Society depends on the rule of law to prevent anarchy, protect its citizens, and dish out appropriate punishment to those who commit crimes.

In France, there are 67000 prisoners overflowing out of prisons designed for 63000. Every year, 75000 rapes are committed. From this statistic alone, it's obvious to all but the blindest liberal bobo that there is a woefully inadequate number of prisons.

Why doesn't France build more prisons? It was on the cards during Sarkozy's presidency but was opposed by socialist senators and deputies. They believe that an increase in prisons would mean admitting that the number of criminals has increased, which it has. But in a socialist 'Bisousnoursland' (Kissyteddyland) paradise, criminals are in fact nothing but victims themselves. According to Sophie Endelys a romance writer and judge, the increase in barbarity of even the most banal crimes such as credit card theft is certainly due to "un déficit de vocabulaire" (a lack of vocabulary)... By not having the words to express their emotions, they have no other answer than aggression and violence. How about buying criminals a dictionary?

Criminals are therefore victims, but what about the real victims of crime? They are of secondary importance. What is important is helping criminals by giving them a second chance, third chance, tenth chance, all the while imposing on the population in general the failed results of this experiment who continue to rape, kill, attack.

The socialist answer to punishing crimes is to opt for 'aménagement de peines' which means reducing the sentence for each crime. They believe that everyone can be saved from him or herself. They believe that criminals just have to understand their crime, make amends honourably and come back into the fold newly awakened as a born again Good Person. Many criminals understand what they have to do to escape punishment. Before the judge, they bow their heads, express sincere regret at what they've done, say they understand that it was wrong. The judge, under obligation to sentence as little as possible either believes or goes along with the lies, supported by the criminal's tales of childhood woe, and administers as little punishment as possible.

What happens now is that certain criminals are just not imprisoned however many crimes they commit. Here's just one example. A man of 18 is condemned to two years in prison for sexual aggression. He has already notched up a total 63 previous convictions. In France, a conviction of under two years is rarely carried out so Selim is free to strike again.

The social contract in France is disintegrating. A sentence of life for the absolute worst criminals - the murderers, serial killers, etc. - means a maximum of 22 years. If they are imprisoned young, they will still be vigorous enough to kill again when they get out. The justice system thus condemns to death a number of innocents because it refuses to lock up the most dangerous killers forever.

The new Garde des Sceaux (Minister of Justice) Christiane Taubira began her tenure by abolishing tribunals for 16-18 year-olds which is a shame because it's an age of high delinquency and crime. What will happen to the 1600 minors accused of rape now?

One way of reducing the prison community, the socialists have decided, is to set free a massive number of prisoners including all those inside for less than six months, plus all those pronounced more than two years ago. But it's not a 'mauvais signal', oh no, some of these criminals will have electronic ankle bracelets.

Mind you, not all prison sentences are even carried out. There were 100,000 criminals waiting to go to prison in 2009, and 82000 simply did not go at all which represents 20% of all firm convictions.

Every year, the official figures in France underestimate the number of those not represented by a vocal lobby being attacked violently as 450,000, or 0.7% of French people who are thus 200 times more likely to be attacked than Muslims, 100 times more than homosexuals and twenty times more than Jews.

Considering how vocal and insistent the associations representing these groups are, it's a shame that there is no association to demand justice for everyone else.
Published at 11:54 am