We were not prepared to pay €10 each for breakfast at the Hotel du Lyon, but I did get my DB a couple of espressos from the breakfast bar without which he's fit for nothing, and we weren't charged for them!

He was now as perky as a cricket but I was not, and needed brekky of some sort. We rode out of town and headed north and eventually came across another tiny spot which had a 'biker friendly' bar-restaurant. 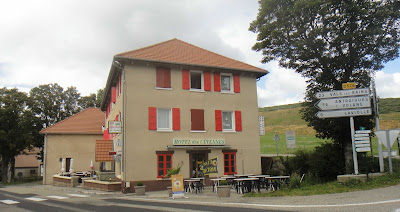 The inside was gaily decorated with the St George's Cross flag, the NZ flag, the Dutch flag and the Italian flag for no rhyme or reason apparently, and nothing to do with rugby. The patron just likes flags... It was not busy, so we asked if we could have coffee and croissant and although the bar had none, as luck would have it, the young local boulanger was there quaffing a quick one and said he thought he had two left.

Off he went to pick them up and he arrived back while the coffee was still steaming. I've had some bad croissants in my time, the last in living memory being the one I had on the TGV this summer. It was particularly disgusting in comparison to the delicious true croissant I had bought on my way to the station from the proper boulangerie down the road. Unfortunately I didn't buy enough and was still hungry. Serve me right!

Anyway, what was set down without ceremony onto the table in the little bar was even worse than the TGV croissant. I don't know what it was made of - donkey fat and old shoe leather perhaps - but it tasted nothing like a croissant. I can't imagine the local lad made them by hand, he probably got them as a job lot for the freezer from the nearest industrial estate. They were fuel however...

Off we set again, onto the chilly high plateaux of Ardeche where it was 13.5°C. While they were still cavorting in little more than leather thongs and whips in Cap d'Agde, here they were wrapped up snugly in woollies and wellies.

It was Sunday morning and in the arrière pays, they close up at noon sharp. If we wanted a picnic lunch, we had to act, fast. We came to a village which had a tiny Proxy market whose owner was sweeping up outside - not a good sign. We jumped off the bike and asked if she was still open. A canny peasant, she was not one to shun a potential sale, she gave us two minutes in which time we found crisps, local cheese and Vals water. She had no bread however... neither did the boulangerie, nor the organic shack, nor anyone else. The entire village was clean out of bread and the bells were ringing out - DOOM  noon.

We ended up with cheese and crisps for lunch!

That afternoon we drove along the Gorges de l'Ardeche where it was a much hotter 31°C! It's a very wiggly river, perfect for canoeing, 32km long I think, and with absolutely stunning views: 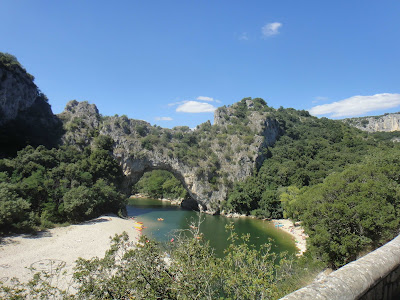 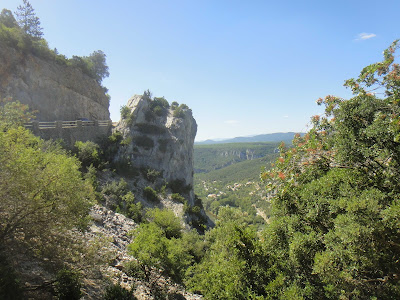 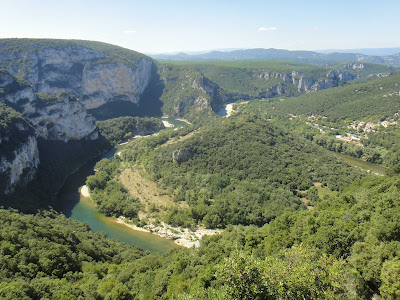 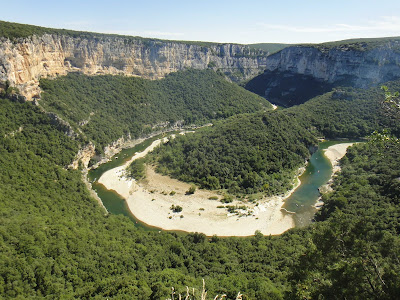 I've got my eye on some of the caves in the cliff sides... just in case one needs a spot to hide away!
Published at 6:03 pm