My DB was busy at a meditation retreat this weekend... sudden thought, is that a contradiction in terms? Busy/meditation/retreat? I'll rephrase: he was not available for a walk in the sun so I went by myself.

My eldest graduated from the local lycée last year which is exactly a seven-minute drive from my house. Having made the trip countless times I know every last blip in the bitume and reference point along the way. One of these is the entrance to the Domaine de Saint-Sauveur, a protected forest of roughly one hundred hectares.

Students at the lycée don't look out onto graffiti'd walls of decaying inner city buildings, but garrigue and pins d'Alep.

Visitors to the domaine can explore by foot, mountain bike or horse. I was on foot, at a brisk walking pace in the chilly but crisp and sunny 11°C. I set off at the same time as a bloke decked out in black and turquoise blue that harmonised nicely with the colour of the sky. He was keenly jogging...

My DB is always on about doing things mindfully now that he's into meditation and such. I call it 'being in the moment' and it's something I've been aware of for years now. Anyway, in the spirit of joining in, I dug my telephone out of my bag (I'd forgotten my camera), and decided to look at what I saw mindfully.

The forest is criss-crossed by paths of every type. There is a parcours de santé (health run) which used to have signposts along the way instructing you to carry out some action like wave your arms like a windmill, walk with your knees up, do ten press-ups, etc. That was several years ago and they all seem to have been nicked or vandalised now, so the exercise apparatus is still there but you have to know what to do with it, and for how long. Most people just jog and ignore the monkey bars, parallel bars, press-up bar and so on.

I left the main path and followed one signalled by a yellow stripe. It took me up hill and down dale along a narrow stony track that I hoped would not be the chosen route of a maniac cyclist.

The jogger was nowhere in sight, and I met no one else either. There were other cars in the car park so the place was not deserted, but it's so big you can feel pleasantly alone even if you know humanity is not far away.

I wondered what had happened to the dead tree, stripped of bark and wood weathered smooth. Maybe it was the victim of a rare typhoon.

The lover trees that seemed to be leaning over to kiss from one angle just looked liked leaning trees from another, a bit like that Channel 4 moving logo.

My walk was punctuated by bursts of fragrance as I went past bushes of thyme. Strangely, while the sun was strong enough to warm the essential oils of the thyme for the enjoyment of all, it wasn't for the rosemary which had to be crushed to release its fragrance.

I hadn't intended on walking for hours as it was mid-afternoon when I started out, so at some point, when the small track crossed the main path, I took it and headed home. 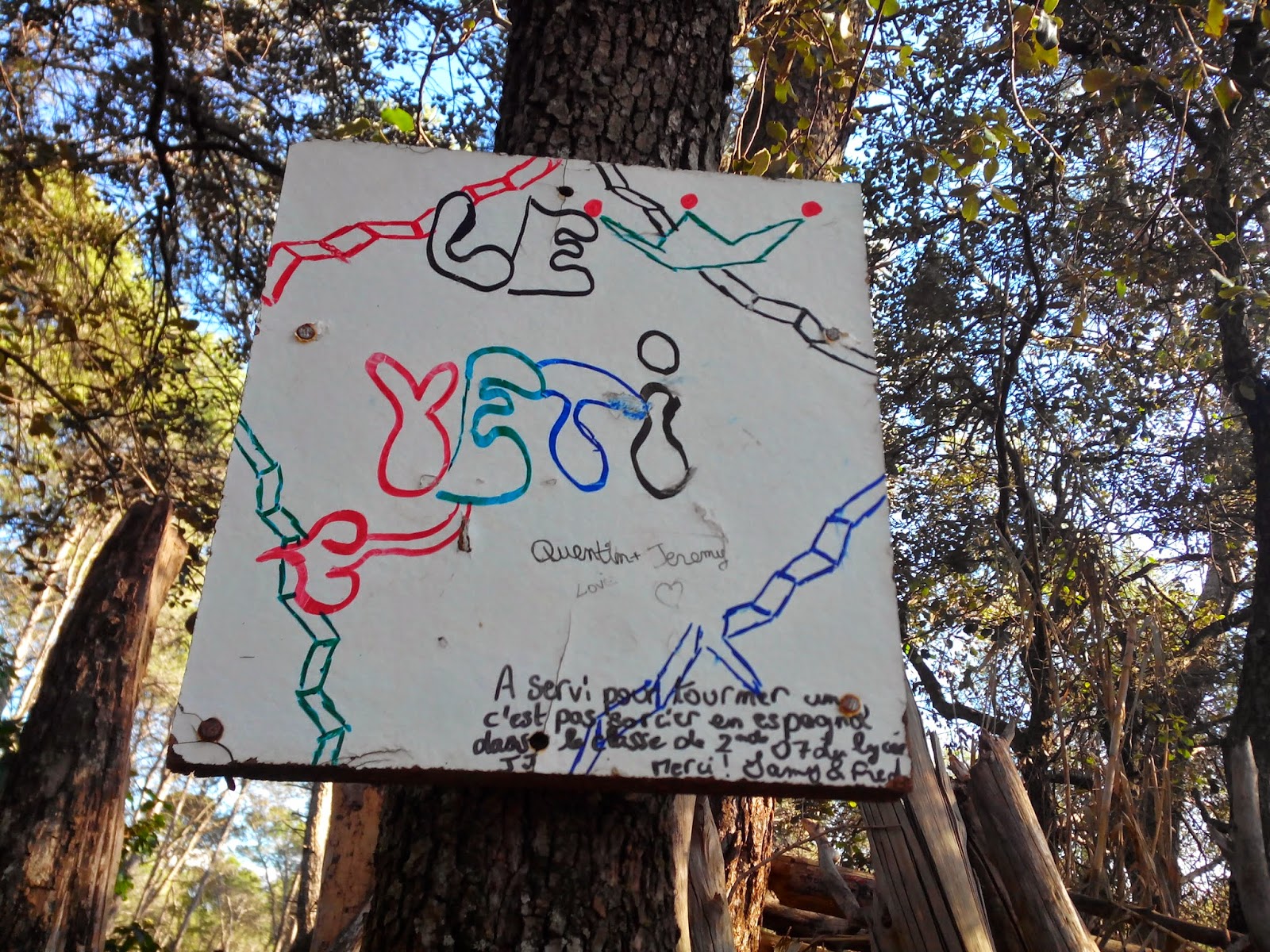 There's a children's educational programme in France called 'C'est pas sorcier' (It's not rocket science), and the panel on the Yeti den I saw near the entrance says that it was used as part of a show in Spanish. I've never seen it before, but I'm sure it'll be a great hit with the kiddies that visit the park. It even has a couple of branches of dried herbs hanging up inside.

Guess who I caught up with on my way out of the park? Le joggeur in bleu ciel. I wonder which route he took and if he had jogged mindfully. He looked knackered, anyway.

I had a brief look at the notice panel in the car park and saw that you can walk 30km from the Domaine to Mas Neuf (where I went earlier this month). It takes eight and a half hours apparently (less  if you cycle or ride), but must be lovely in the spring. You'd have to lay on transport back though...

We're lucky to have such a spot close by.