A weekend in Lyon with motorbike ride into the Monts d'Or

While the UK has been agog with Brexit, the French with the footie and Tour de France, I (who couldn't vote) have been battling with my new project of learning C sharp, in the heat, with a rubbish internet connection and laptop that keeps overheating.

By way of distraction last weekend, I went to help my DB move from one well-appointed flat that he wasn't paying for (director's perks during his trial period) to one that he will be paying for (his trial period being at an end). (And while I was at it, take advantage of his super fast internet connection.)

The last time I was in Lyon it was also to help him move, funnily enough. This was a fairly painless affair because he was moving from one furnished flat to another furnished flat within the same city, so it just took a couple of car loads, a reasonable amount of humping up stairs, and a limited amount of cleaning (for me at any rate).

He moved from a flat with no view, to this:
The trees form part of a park that residents can enjoy, that goes right down to the river Saône, only separated from it by a main road.


The Alps are almost visible in the far distance.

The flat, and building are full of original features, but it's all been nicely renovated too. Quite the des res!

On Sunday morning, we took a break and went for a motorbike ride into the Monts d'Or and Beaujolais. The local stone is a remarkable vibrant orange/yellow and makes for some charming villages. 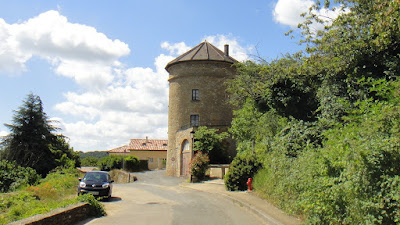 We were on the new bike (BMW1200 GS) which purred through the villages, and roared through the countryside. My DB loves the engine... The passenger seat is comfy too.

Either the fields in the photo above are on a slant or the village is. I can't quite make up my mind. As I took it from the back of a moving bike it could be either! The vineyards are part of the Beaujolais appellation. Let's hope they have a good year this year and produce lots of delicious wine.

One village that we went through obviously had some eccentric inhabitants with a fine line in graffiti.
We didn't stop to find out any more about who had created the artwork but I know that s/he is not impressed with the modern state of France...
My favourite said: "Julien Coupat - Eric Hazan (radical lefties) -> un livre d'opinion mène en prison au nom du terrorisme!".


We finished the day, later, with an apero outside a bar in the Croix Rousse quartier which is where all the bobos live. The air was balmy, the rosé iced, and it was lovely and peaceful, with just the murmur of conversation from tables nearby.