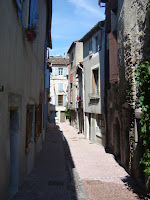 Sometimes when you arrive in a town, you wonder quite why it was you wanted to go there because there is no apparent appeal and you are not inspired to explore further. I surely cannot be speaking about Olargues, one of the 'Most Beautiful Villages in France'. No, I'm not, I'm talking about St Pons de Thomières which is 10km or so west.

In a nutshell, if you're thinking of going there, don't bother. This street, for example, is a run-down crappy old dump with abandoned houses, peeling paint, unpleasant doors and an air of being a poor relation, probably to Olargues. It is charmless and unless you had just got off the plane from somewhere really foul, you couldn't help but be disappointed. 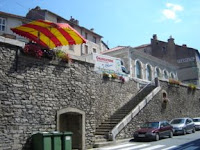 Here, on the wall, is the market. Two stalls: one of tired looking vegetables beneath the parasol and the other charcuterie in a van. Up there is the 'Place du Marché'. The market is obviously not a big thing in St Pons...

Unlike Olargues, where we were heading for the Marché du Bio.

Wishing to forget this 'Capitale du Parc Naturel Régional du Haut Languedoc', we continued on in search of lunch. There had been some discussion about lunching on omelettes aux cèpes at a roadside café in St Pons, but although cèpes are in season, I suggested that in such a place there could be no guarantee that a more financially advantageous using of tinned cèpes wouldn't be what was on offer. Maybe a cynical thought, but don't forget that tourists are considered fair game... 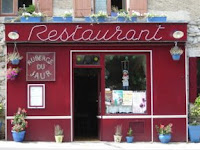 On we thus went, towards Olargues, and stopped in Riols which is tiny, but had a very lovely shaded terrace next to a little restaurant called the Auberge du Jaur. On the other side of the road was a little square where tables sat beneath a series of enormous plane trees. It all looked very jolly and most promising. An elderly couple were regulars and apparently had lunch there every Sunday. Today they had found themselves next to a couple from Jacou near Montpellier and were having a lovely chat all about the history of the village. Monsieur even dashed home to fetch his book on the subject so he could show it to their new friends. Addresses and phone numbers were also swapped! 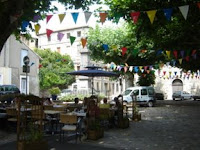 Not only was the atmosphere friendly, but the food was delightful and extremely copious. I ordered an 'Italian salad' which came with flakes of Gran Padarno, and Italian charcuterie, and was so huge it practically hung over the sides of the plate. That was the starter! Next I had ordered the magret de canard, which came with gratin dauphinoise and gratin de courgettes. Again, you were expected to have a healthy appetite in order to clean the plate. I copped out with just ice-cream for dessert. The menu was 18.50Eur, plus wine. 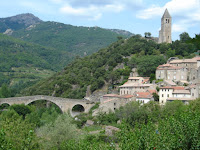 Feeling somewhat full, we made our way along the winding road to Olargues and parked as soon as we found a spot. The view into the village is stunning, looking over towards the bridge and the tower which dates back to the twelfth century. You walk up through well-maintained streets lined with well-restored houses; all apparent stonework and solid doors. No peeling paint or botched crépy here.

The market was down the main road, with organic producers of wine, vegetables, apple juice, cheese, biscuits and honey. There was also a stall selling some niknaks in ivoire végétale (ivory palm), another selling homespun pullovers (in this heat!), and one guy who brewed his own floral essences. Down at the bottom was an African panier stall where I bought a big reed bucket as a washing basket since my boys have wrecked my two plastic ones.

We tasted the organic wine and took part in a testing of old tomato varieties. They looked promising, but their taste was never better than bland. I filled in the form and gave, out of ten, no more than five overall. I'm pretty fussy about tomatoes and insist on a good strong taste. The only ones which vaguely make the grade are cocktail toms. Anyway, it was fun taking part and the intentions of the growers had to be applauded a) to maintain a diverse tomato stock and b) search for a really tasty tomato.

With Olargues, we were not disappointed. We met some passionate wine growers - ones who believe in producing delicious and healthy wine without chemical yeast or sulphites.

Our drive back, along the D14 which is 'green' for 'beautiful' on the map, was certainly a pleasure, following the river Orb, through Roquebrun with its beach full of people and skirting the north of Béziers to rejoin the autoroute.

So, to recapitulate: don't go to St Pons; do go to Olargues and Riols, and pop into St Chinian and Roquebrun if you have time. Fun days out!
Published at 8:27 pm