Last weekend was the Journées du Patrimoine in France where you could visit all sorts of historical monuments for free.

I usually miss this for some reason - I find out at the last minute when it's too late. This year, however, I was around, informed, and available, with my youngest. Visiting sites with him is a little tricky as he has to be able to run around, touch, jump on, jump in and so on.

After a quick surf on the web, I decided the easiest place to take him was the Jardin des Plantes on Boulevard Henri IV in the centre of Montpellier. They were offering various opportunities to be artistic from drawing with charcoal, pastels or ink. As my youngest loves painting I opted for an afternoon's discovery of this interesting garden.

We went early in the afternoon and were therefore able to park the car nearby, then mooched down the hill with part of the Faculty of Medicine on one side, and the garden on the other, huge plane trees down both sides providing much appreciated shade. At the entrance to the gardens, some tables had been set up and burly gardeners sat there pretending to be hotesses d'acceuil.

There they were chatting amongst themselves saying that it was funny how they didn't have any 'customers' for the artwork, with my youngest and me standing there in front of them. So I said that we were there (didn't think I'd lost that much weight that I'd become invisible...) and two girls who I thought were visitors seized upon us and asked my youngest what he wanted to do. 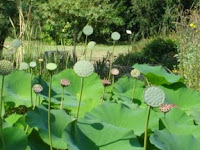 Turns out they were the hostesses and the burly gardeners were just there to look pretty, or authentic, or something. My youngest said he wanted to use the ink, had a look around and drew the beautiful 'if' cypress tree up at the top there. We then had a walk around, or run around this garden that was originally developed to provide plants for use in medicine.

I loved these lilies with their watering can spouts and huge leaves. They positively glowed in the sunlight. Climbing on them, was a turtle who fought over a piece of bread that had been thrown in by a picnicker with tiny fish. 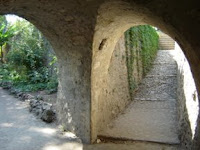 Within the gardens were various nooks and crannies including these elegant arches over which a bed of cacti had been placed around a 'noria' watering system. The cacti had come from all over the desert world and were all shapes and sizes. My favourite were some big fat round ones from Mexico with lovely sharp spikes in all directions. They didn't grow up much, but they grew out, just like many Americans...

The garden was the idea of the French king Henri IV - he of the boulevard - who in 1593 asked a professor in botany and anatomy, Pierre Richer de Belleval to create a royal garden. At this time medical gardens were very widely spread in Italy, but the Montpellier one was to be the first in France. It helped develop the importance of Montpellier in medicine. It was classed as a protected site in 1984 and as a historical monument in 1992. 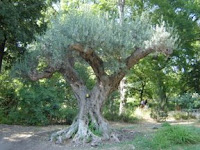 The oldest tree in the garden is this 'letter tree' of the same family as the olive tree but with deep 'géodes' (holes) in the trunk which served as a letter box for lovers. Apparently it's one of the most famous trees in France. Other features of the garden include a huge gingko biloba, a bambouseraie, and many if conifers which are long and thin and grow incredibly slowly. They are almost totally toxic except for the red berries. There's also an 'English' garden which just looked messy.

Actually, much of the garden looks like it's being restored. We enjoyed our visit but I did think it needed more investment to tidy it up a bit. My youngest ran about, shook the bamboo, spiked his finger on a cactus, jumped off walls, poked his fingers into the letter box tree and shouted from within the stone arches. He had a lovely visit!
Published at 9:40 pm