Guess wot! It's snowing, and snowing hard enough and dry enough to layer everywhere with the wherewithal to have an advanced snowball fight. The boys are outside, relatively suitably dressed, with all the other local boys and they are going at it hammer and tongs, as it were.

I have no plans to go out this afternoon. This is a Good Thing because I would not be able to go out even I wanted to. The 45° slope on which I live is un-passable unless you happen to own a tractor. No, I have plans to slob out all afternoon. If I didn't have the boys, I'd do it in front of a movie or two with various essentials such as chocolate, wine, nibbles and warm furry blanket. As I have the boys, we will be painting the crèche pottery figures we bought last year and putting up some Christmas deccies.

I am not buying a tree this year as we will not be here for Christmas week and the boys not at all over the holiday, so I don't see the point. However, we will drape lights everywhere, hang baubles where we can and get the three kings I made one year up on the wall. I'm sure it'll look luvly...!

Well, this is a bit later, and I went out to see what the boys were doing. They were sledging down the slope! I threw some snowballs at them for good measure, forced them into their snowboots... and then brought them in for piping leek & potato soup and crusty bread. 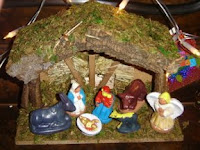 The crèche figures look... er... interesting. It's not easy painting pottery, and my youngest has a certain penchant for the psychedelic. Look at Joseph... and the lamb... and the manger is not bad. Baby Jesus looks like he had a confrontation with Goldfinger and lost! The overall effect looks fab, really!

I actually managed to post some cards this morning. Heaven knows when they'll arrive in the UK. I'm going to cheat for the most part though and send electronic Christmas cards. It's more certain they'll actually arrive!

Tomorrow, Christmas fair in the village! I haven't been to one yet! I'm only just getting into the Christmas spirit. Better late than never...
Published at 12:35 pm