I think I overdid it yesterday. The weather, which had been depressingly cloudy and wet during the week, turned glorious just in time for the weekend.

I had spent a fraught Friday night getting the boys off on their trip to Paris to see their father. Because of my eldest's faffing about getting his schoolbooks sorted out to take, we had to race to the platform only to see the train pulling out and on its way. I emitted an expletive loudly and forcefully.

We then queued up for half an hour to change the tickets and they must have got the last two seats on the next train, in first class natch, and needed a supplementary financial top-up. They looked mighty pleased with themselves sat at their two-place table with two glamorous and perhaps even famous chicks at the foursome table on the other side of the aisle.

So yesterday I was boy-free, and it was sunny, and I was determined to make the most of it. Pooh-poohing the idea of shopping, I donned some sporty shorts and tee-shirt and headed off to the beach. There wasn't a cloud in the sky - the sun shone generously, warmly, full of vitamin D. 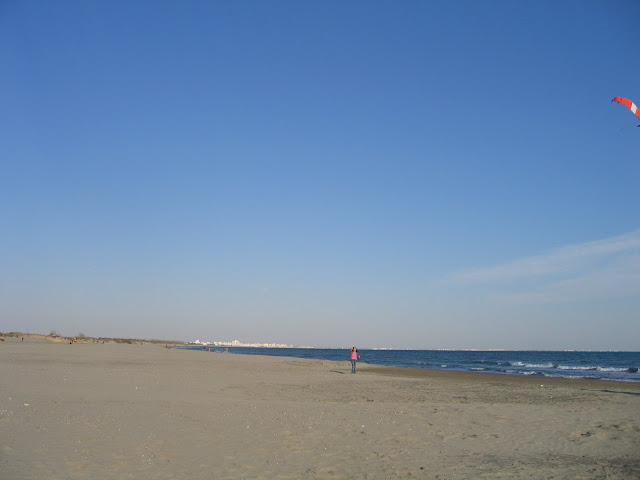 I aimed to do my Carnon (Petit Travers) - Grande Motte walk at a healthy pace. The beach was empty except for a few people walking their dogs/girlfriend/spouse or jogging, and one or two families scattered sparsely. There were even people in the sea. I tested the water and it was surprisingly warm, not that I was about to rush in and go for a bracing swim, mind.

I set off quite lazily, warming up. It's been a year since I did the walk and I was feeling a bit the worse for my lack of regular exercise. As I loosened up, I upped the pace and walked briskly along the hard sand at the water's edge.

The sea was peaceful with only little wavelets splashing up onto the beach. It was too calm for sailing boats so there was hardly any activity going on further out. The odd plane heading for Montpellier droned from overhead as it swept out over the water to U-turn back for landing, wheels down at the ready. A handful of fishermen had their rods out, and their nutbrown wives were enjoying deepening the colour on their topless chests.

I nearly killed a Yorkshire terrier puppy however, inadvertently I might add. I was walking along at a brisk pace and passed a couple with two dogs off leads one of which was the puppy. I didn't realise it, but it seemed to think I had something terribly attractive to smell round about my ankles and came tearing after me running under my feet and causing me to trip up. I nearly trod on it, and it would have been a goner, it was that small. Its owner came rushing up to scold it and try and make it realise it had behaved stupidly, but it was really an exceptionaly stupid animal because it had not learnt its lesson at all. I had carried on walking but became aware that the owner was shrieking at the mutt because it was charging straight for my feet, again. I looked down and there it was dying to be trodden on, and the temptation was almost too great... However, it was scooped up into the arms of its owner before I could do any damage and whisked away.

I reached La Grande Motte and sat down for a rest in the sun, soaking up that vitamin D and some colour to my face, then I got up and walked back. I was feeling a tad tired though, so fairly ambled along back to the car.

Despite climbing up hills and doing bits and bobs in the recent past, that walk has left me physically exhausted today. I had to do some cleaning, but my hips are killing me and I feel like some crippled old biddy as I hobble around. So I've been taking it quite easy, had a snooze after lunch and been reading my latest compelling read, 'This thing of darkness'. Not chicklit, but a fabulous story of adventure mapping that most hostile of coastlines, Patagonia, back in the nineteenth century.

It's about as much adventure as I can take right now, hunkered down in a comfy chair in the sun.
Published at 2:00 pm