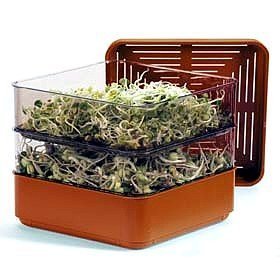 It's taken a while, but I finally got a harvest from the seed sprouter my youngest gave me for Christmas. When I say he gave it to me, I naturally mean that I bought it, wrapped it up and put a tag on it written by him "To Mummy, love Youngest". There was also a bag of assorted beans to sprout, all bought at Botanic when I went to buy the Christmas tree.

I would have played with it earlier, but you have to start by soaking the beans in a lot of water in a jar with a muslin lid. Whoever uses muslin? I don't even know where you can get the damned stuff. I used an old tea-towel that had seen so much service it was worn as thin as one of those crèpes through which Fanny Cradock said you should be able to read the newspaper.

Fanny Cradock? Who she? Never mind. Only us middle-aged plus crocks can remember her and her husband Johnny. She was the one who alerted us back in 1974 to the use of monkfish in scampi as a cheap alternative to prawns. Have they since gone back to using real prawns? The price of monkfish is such that prawns must certainly now be the cheaper alternative!

So, once my beans were soaked overnight, I could put them in the sprouter and rinse them twice a day. I think I started the whole operation on Monday because I had a day off, but I seem to be suffering from Winteritis because I'm so keen to see the end of short dark cold days that I keep advancing time in my head. I was rather hoping that this weekend, for example, was the last of the month when in fact it's only the penultimate one. There's yet another January week to plod through.

Last night, I finally deemed my sprouted beans ready to eat. They were going to accompany a rather yummy dish I'd made with lieu noir (coley) in a creamy lemon mustard sauce with roast spuds (everyone's favourite!). I made a green salad of watercress, lettuce, Chinese leaf, and chicory, threw the beansprouts on the top and mixed up a balsamic vinegar and olive oil vinegrette. It went down very well even with the younger generation who scraped out the bowl.

Flushed with sprouting success, I'll definitely make another batch - I still have one tray left to use up, and this weekend will set more to soak. They were really tasty, made a lovely crunchy addition to the leaves, and of course, are terribly terribly good for you.

Salad just became even more interesting!
Published at 7:13 am