Sunday was the day of the mountain bike (VTT) competition. I only had a vague idea where to go, so followed the car of the club prez. I really must remember to buy a new map of the area - I finally got round to chucking out all the old ones as they've changed all the road names and I was really none the wiser with one of these maps or without.

I had to cope with an early start, getting up on a Sunday at 6.30am! That was tough as I was just sinking into a post way too early waking up second-wind snooze. There was a ton of stuff to remember - picnic lunch, bikes, helmets, kit, licences, water, jackets, plastic gum protection (yeah, still have to use that for eating), head. I forgot the crisps for lunch. The competition took place at the Base de Bessilles out towards Pezenas way. The local bike club organised it, sponsored by Hérault Sport, and it was really well attended. We, of course, had no idea about anything, never having been to a VTT competition before so started off by running round like headless chickens.

Eventually we got ourselves sorted, found where to register, the guy who fixed the orienteering supports onto the bikes (the guy we'd followed...), and where to start.

My youngest was the first to go, setting off having never done orienteering on a bike or in a competition. I crossed my fingers and hoped for the best. He obviously had listened to the instructions and understood what to do because he came back within the 45mins with his paper full of notches. I was really impressed.

Eventually my eldest set off too, with a harder set of posts to find, and he too arrived back within the time with his paper full of notches. I'd had to rush out the day before to buy them watches so they could monitor the time, and cycle pants so they'd be comfy and look the real deal.

The day was a sunny one, but there was a nip in the air especially when the sun disappeared behind a cloud, and it was pretty windy. We decided to eat our picnic in the back of the car out of the wind and toasted nicely by the sun. There was no way I was going to carry a heavy cool bag the 200m or so down to the grassy field - what I needed was one of those jolly red wagons to take the weight off...

After lunch and a laze in the sun, it was time for the Xcross race. All the competitors in the same age group start together, the little ones doing 2km and my eldest 10km. The longer races looked pretty tough, with steep climbs and sharp corners. Amazingly, my youngest came in an easy second so we were all very proud - this was his first competition after all. 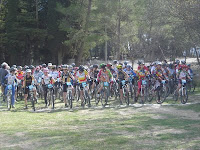 There was a huge number in my eldest's category and at the start someone in front of him fell and caused a moment of havoc as the others tried to negotiate around him. The best of the bunch were very obviously way ahead of the rest and shot off, shot round the course, and finished easily. My eldest got a good taste of how hard it is, and thoroughly enjoyed it.

Neither finished on the podium as the total of the two races was the criteria used to assess position. It was a bit galling to see the girls who'd come in last way after the others get up on the podium for second and third place simply because there were only three of them competing. It's a shame that more girls don't join in though. I would have loved to do that when I was young.

Verdict on the day: they loved participating in the competition and want to do more. Great!
Published at 12:58 pm