VTT Vauvert in the rain

This morning, instead of staying snugly under my duvet having a nice lie-in followed by a cup of tea in front of The Times Online, I got up at 6.45am, made sarnies, put two bikes in the car, shouted at the boys to get ready, got their stuff ready, and kicked them into the car at 8.15am.

It was raining a bit. By the time we got to the autoroute, it was raining much more. This came as no surprise because Meteo France had been warning us that today would be very very wet, and put half the country on yellow alert for inclement weather.

Still I didn't get word that the mountain bike competition was cancelled. I had emailed the secretary of Bike Aventure and asked when we would know if it was, and he replied that they rarely were. So that's why we were driving to Vauvert, to Mas de Madagascar in what seemed to be an appropriately tropical rainstorm.

Little orange arrows with VTT written on them directed us around the town, thankfully, to the spot out in the middle of nowhere where, to my surprise, loads of cars were parked. People were unloading bikes, riding bikes, pushing bikes and walking under umbrellas with purpose seemingly unconcerned with the now lesser falling rain but menacing clouds. 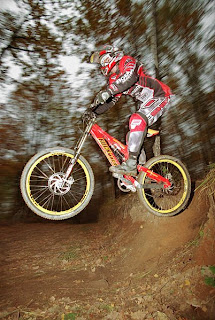 The competition consisted of a cross-country race in the afternoon, and a downhill course in the morning. Rules indicated that the competitors needed full protection including helmet and back carapace. We had the knee/tibia pads and elbow pads but not the helmet or the carapace, but that was not supposed to be a problem because the club has stuff we could borrow.

At this point it was raining more and I was starting to get annoyed. The boys couldn't race if they didn't have the equipment and we had got up early so we could participate on the understanding that we could borrow stuff from the club, except that no one from the club had come; we didn't see any other of our boys either and I wondered if we'd come for nothing.

We were getting wet and cold so I went up to the organiser and said that as the boys didn't have the right equipment he'd better strike them off the list. He replied that they could borrow stuff so my youngest went first with his 'Pupilles' section and was kitted out. It's a very impressive sight seeing these little kids stomping around protected to the hilt.

He finished the course - I didn't see it as I was up at the start with my eldest - but he said it was good fun when he rejoined us. Eventually it was the turn of my eldest, and the rain was getting heavier. He was called and got into line, but after all that waiting he was told he couldn't race as he didn't have 'bouchons' - those plugs that go in the end of the handlebars.

Well that just about finished me. We were really wet and very cold so I asked my youngest if he wanted to stay for the cross-country in the afternoon and when he said no (phew) I told them that we would go home. We gave back the race numbers, picked our way through gushing streams flowing down the middle of the paths and got back to the car as quickly as possible.

What a relief to be in the dry! We got out of our wet things, but I hadn't brought a change of shoes. The soil there was bright orange. It got everywhere - on the mats, the pedals, everywhere.

We arrived home around 12.30 and rushed joyfully into the house leaving everything wet except the clothes in the car. I chucked it all in the machine and got it washed ASAP.

Notes for next time it rains: take a much water proofer water proof, wellies, bigger umbrella, warm clothes, change of shoes. For all.

Positive notes: the rainwater has left my hair lovely and soft, the boys were amongst the only ones in the club not to wimp out of biking in the rain (2 more turned up with their own kit).
Published at 4:06 pm