I seem to be writing a lot of mountain biking (VTT) posts at the moment. It's not that there's nothing else going on, or nothing else to comment on or write about. I had my hair cut yesterday, for example. A re-look in fact - all chopped off and even blonder. There comes a point when one is fed up with long hair, that it doesn't seem to suit any more, and that with summer looming, one might just as well go for something shorter and cooler although I'll have to remember to slap on the sunscreen. 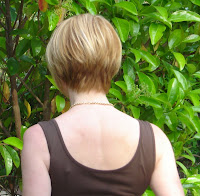 Here then, is new me. I spent 4hrs in the hairdresser's because my roots had to be coloured, then chopped, then the highlights put in and then a final chopping and drying.
Waiting for the colour to take, I picked up a couple of numbers of VSD magazines and read about the credit crisis passing by the world's young rich, and the problems faced by illegal Malian immigrants when they are returned to their country of origin. If they are sent back they take nothing and are considered shameful by the family, but if they volunteer, the French government gives them 5000Euros and those that take it use it usually to start a business. Then an article by Yann Arthus-Bertrand on his new tele programme giving us 10yrs to save the world from over-consumption destruction.
That depressed me so much I put the magazine down and turned to my book instead.
Meanwhile most of the locals seemed to pop in for one reason or another. It was a very lively place this hairdresser's with lots of badinage and chit-chat. I was told that her son was divorced mainly because his ex-wife didn't want to live in Monaco but insisted on coming back to Montpellier, spurred on at every turn by her mother who didn't believe daughters should live any further than next-door. Montpellier is the centre of the universe (not Perpignan's gare, sorry Dali) and there is no reason to go cavorting off to live elsewhere, and especially not Monaco!
I sympathised with my hairdresser (Joyce) because Monaco is not that bad, and mothers shouldn't have such a toxic influence on their children to the point where they break up marriages and prevent children from seeing their fathers.
Then the pompier father of one of the stylists came in to say hello to his daughter, give her a kiss and have a coffee, followed by some more local guys who came in to fix the air-conditioning, and have a coffee.
Regulars were greeted warmly with bises - they'd probably been coming for the last 20yrs at least - and noobies were welcomed as potential future regulars. One woman limped in with a broken leg and frizzy hair and asked if they could do anything about it. She was sat down and a discussion ensued about her lifestyle, hair habits and desires. Following the revelation that she does nothing to her hair, swims in the sea a lot and wants a no fuss style, I would have suggested a number 1 razor job so it was a good thing I was not the professional there. Instead it was decided that her hair was so dry nothing could be done (except a number 1 razor job) to improve it without a couple of weeks' attention. She went off happily with a bag full of enriched shampoo, conditioner and super rich hair mask - 70Eur the lot and told that she would see a big difference already with properly cared for hair. Then she could come back and discuss defrizzing.
There were older ladies having a shampoo and set, a couple of guys getting a mowing and a young man with dark spikey hair and a few blonde streaks at the front who seemed to be a student and kept practising putting in rollers on a lifeless model in the back. That or standing around observing, and making me edgy.
Finally, a teacher came in with a dumpy ado and asked about the possibility of fixing up a little work experience for her as she was a nice girl because if she wasn't worth the trouble the teacher would not be standing there wasting her time. There's charming...
It's not nearly so convivial where I used to get my hair cut. A couple of sessions in this new place and I'll know the whole quarter!
Anyway, I reckon lovely motherly Joyce did a great job, and my TWDB loves it too. The boys couldn't decide but this morning seemed to have got over the change and treated me with their usual matinal insouciance.
I've even got a fidelity card so I can become a regular and get 10Eur off my tenth session. Not quite as generous as some of the chains, but still better than my old cardless hairdresser.
I'll be back...
Published at 7:58 pm