Yesterday we had the second of our May days off. It was WWII Remembrance Day and my youngest's teacher had asked her pupils to attend the remembrance ceremony, so we did. Just. I forgot to keep an eye on the time so we ended up dashing down to the memorial just after 11.

Our remembrance done, we didn't stay for the apero. I had been in the middle of cleaning and had to get back to finish it off. Not the most amusing way to spend a day off, but unfortunately necessary.

My eldest had been whisked off by a friend to spend the day at Les Rochers de Maguelone which is one of those swinging in trees adventure type places. I had to go and pick him and the friend up at the end of the afternoon so decided it would be a good idea to do some cycling with my youngest who was nagging to go out.

I hauled out the bike rack and fixed it to the boot. It's a real pain because the rack is quite high and lifting the bikes onto it requires manly strength. However, I got there and attached both of them to the car as you can never be too sure about racks.

We drove down to Vic la Gardiole and parked the car at the start of a bike path down to the beach of Les Aresquiers. The Région has been busily creating bike routes and this one is really pleasant. It's a Wizard of Oz yellow path wide enough for bikes and pedestrians to move with ease, and well off the road. Three and a half kilometres later, you arrive at the beach, but I suggested we cycle along the banks of the canal for some real peace. 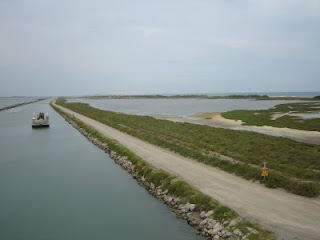 The path stretches as far as Palavas and beyond to Carnon so there is plenty of ground to cover if distance is what you're after. You cycle along a track on a strip of land entirely surrounded by water. It's very quiet, very flat and very empty. There was the odd person out for a stroll but they don't go far so the further you venture, the more alone you are.

The sea is on the right of the picture, identifiable by the white line of the breaking wave. In the etang on the left were oyster and mussel beds, the fruits of which could be bought direct from the producer along the road near where we parked the car.

It was, in fact, a bit flat and unadventurous for my youngest so he made up for the lack of rise by bouncing on his bike. Naturally, this led to him getting a puncture because the ground was full of sharp little stones and the odd bit of glass. I had the wherewithal to change the inner tube but hoped it was sufficiently small to cope with being pumped up from time to time.

No such luck, natch. I pumped and then we went down to the sea too see the pretty energetic waves and stony beach. Although the carpark was heaving, there were few people about. I think they were out for a walk rather than sitting about on a cool and windy bunch of stones.

Time was moving on, so we set off back to the car. After I'd pumped up the damned tyre for the fifth time, I decided to change it. All this bike activity has forced me to learn how to change an inner tube and I'm amazed I never had to do it before. I never got punctures even though I used my town bike a lot.

Anyway, I got out the kit and the new tube and set to work. While I was working away, I was asked several times if I needed help by kind men out for a stroll with the family, or other cyclists. I had almost finished and was pumping the tyre back up when one old guy couldn't believe I didn't need help. He so insisted that my pump didn't seem to be pumping that I let him finish it off. Then of course I thanked him nicely for being so kind and he went off happy that he'd done the gentlemanly thing and helped a 'damsel in distress'.

The rest of the way back was thankfully uneventful apart from the fright my youngest gave a young mother when he swept up to overtake her and her small child and swerved somewhat at the last moment. This led to a lesson on sharing the road and good bike practice and a promise he wouldn't do it again.

Had we had time, it would have been nice to cycle along the cycle track next to the beach. It's a green-marked route on the Michelin map, and goes as far as Frontignan. Probably too flat for my youngest, but a great one to do with my TWDB so I'll be adding that one to the list too.

I managed to get the bikes back on the rack, and they were still there when we arrived home. Perhaps my pessimism is a little unjust.
Published at 4:06 pm