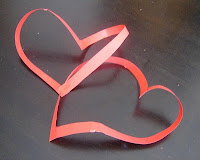 I put my TWDB to work yesterday, Valentine's Day, by getting him to create a Möbius strip double heart. Doesn't it look mathematically cute?

The idea came from The Times (where else?) where instructions were given via text and a pdf file which you could cut out and cut up. My TWDB was most impressed, so Thank You Matt Parker!

Flushed with intellectual romance, we decided on a bit of exercise to drum up a decent appetite, so drove down to the Port of Nice to park the car and walk along the coast to the market. The weather was pretty mild, especially considering that it had snowed several cm on Thursday, enough to cut off my TWDB at the top of the hill.

The sea was a stunning azur blue, and some mad soul was swimming in it without a wetsuit. Lots of people were out and about and waiting for the carnival to start after lunch. We walked to the market, mooched amongst the lovely flowers, our digestive juices stimulated by the smells of all the food on offer.

For a moment, we considered eating in one of the restaurants on the market, but it all seemed pretty booked up so we headed off back to the port. Our intention had been to eat outside, but as the clouds gathered, we decided it had been a good thing not to do so.

Instead we went to La Zucca Magica which is normally not open on a Sunday. Luckily, as it was Valentine's Day, they were open, and even more luckily, they had room for us! We were put at a table for four along with another couple who were already installed. It was most cosy, and fortunately, they were very friendly and turned out to be interesting locals.

My TWDB had been to the restaurant 15yrs ago when it had just opened. Then, there was no menu, and this has not changed. The charismatic chef/owner, Marco Folicaldi, originally from Rome, creates 5 dishes from ingredients gathered in the market that morning and you are brought each one, with explanation, by the friendly waiters.

The restaurant is decorated with pumpkins of every shape and size, paintings of pumpkins on the walls, and those Halloween pumpkin light strings over the bar. Next to our table was the most enormous pumpkin I'd ever seen which weighed in at 270kg! Goodness knows how they got it in.

The food was absolutely delicious, the theme for yesterday being citrus, so there was a slight citrus element to all the dishes. We started with a little tower of sliced oranges with fennel seeds and nut oil vinegrette. Then we had a velouté of ricotta with fresh baby spinach and raisons and lemon zest, then a spinach foccacia with artichoke, followed by a cannelloni in a tomato, fennel and zest of orange sauce. Dessert was a puff pastry heart decorated with fruit and served with ice-cream.

Original, tasty, attractive and filling, lunch was fabulous. Marco came over and regaled us with a story of when he was invited to appear on a television programme for Arte, and our neighbours, who lived just up the road, gave us the best address for socca in Nice.

Definitely recommended, by us and half a dozen food guides. If you're not a veggie, it'll reconcile you to vegetarian cooking for one meal at least.
Published at 12:15 pm