From the Stelvio Pass to Switzerland

There were several striking things about the day, but the most amazing weather news was that it did not rain. At all. All day.

I made some tasty sarnies at breakfast and we set off for Morano which is a very elegant town despite being dug up and in chaos. 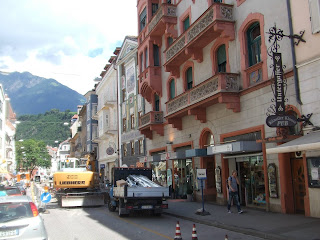 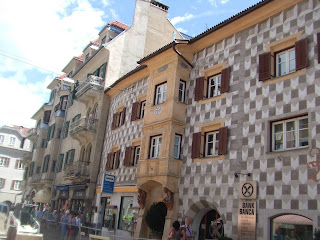 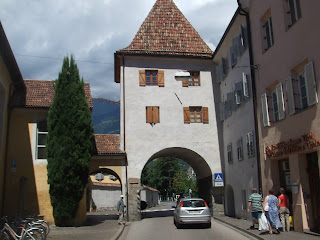 After leaving the town we followed signs for the Stelvio Pass, the mythical road for bikers. My DB was really looking forward to this part of the journey and had high hopes the road would present a challenge for both bike and rider. I just hoped for some pretty views. On our way we went past several castles more or less close to the road. This one is less precarious than it looks, it's just me holding the camera as straight as I could from a moving bike, which turned out to be not very straight. 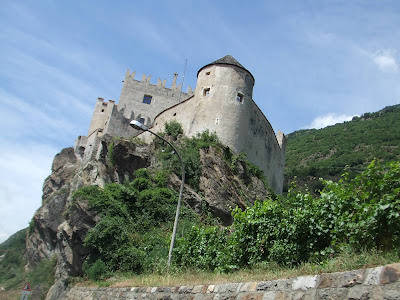 We also saw Alpine scenery like this, with forests of 'weeping' pines - see how the branches hang, and vibrant green spots of hillside pasture where farms perched high up in cleared land. 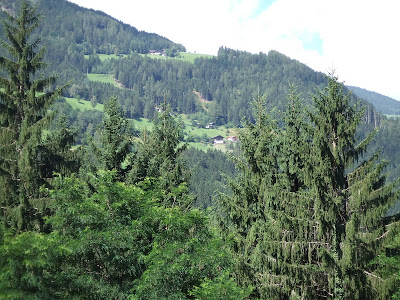 This photo shows the mountain in the background with hillside farms in patches of pasture, then vines in the valley surrounding a small town with what I think is a castle in the middle. Lovely. 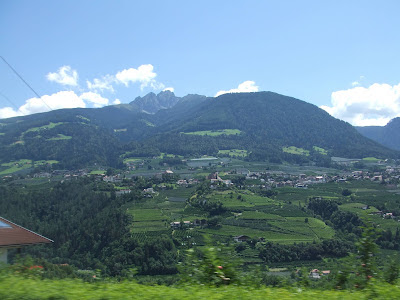 At last we arrived at the Stelvio Pass just before lunch. We decided we'd eat at the top, 40 odd hairpin bends later. We were greeted by the eccentric sight of totem poles 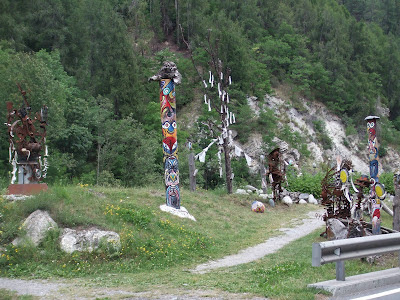 Then we set off. To my DB's fury, the bike did not work as he expected. It is due to go in for a repair tomorrow, something to do with the ball bearings I think, and so coming out of a left-hand bend he could feel something was a bit wobbly. Not life-threatening or anything, but not right. This meant he couldn't accelerate up the road after the bend as he wanted which was most frustrating. He was a bit grumpy when we got to the top, but I reassured him that we could always come back another time (it's basically a day's drive from Montpellier). 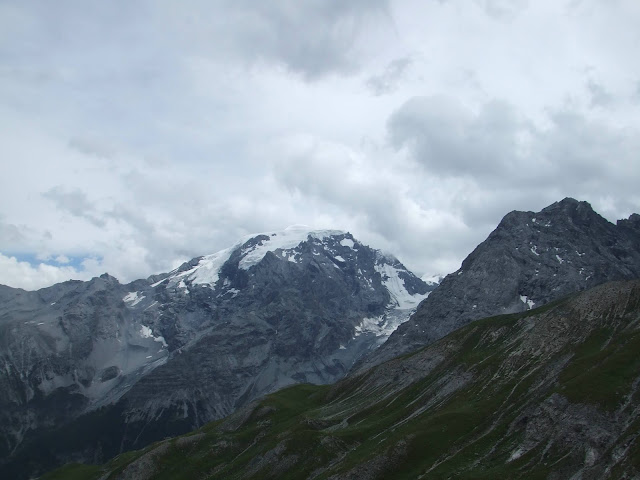 We had our lunch looking down the valley at the road we'd just come up. There is a man on the last bend there on the left who is a photographer and he takes pictures of all the bikes as they come up. You can then go to his website and buy the photo of you on the Pass. I wonder how many people do that. We haven't (especially as my DB has a mixed souvenir). 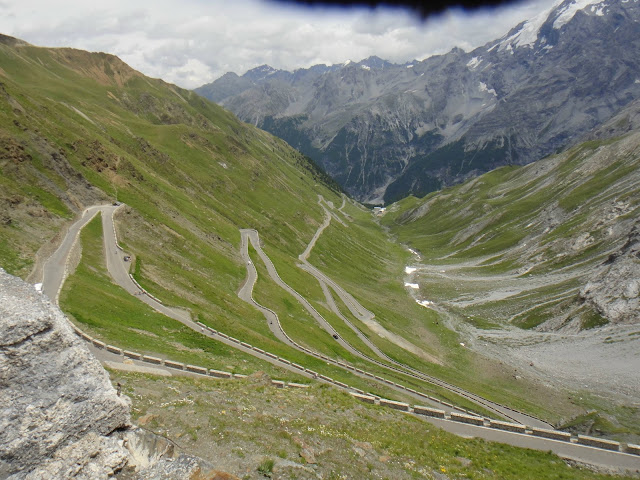 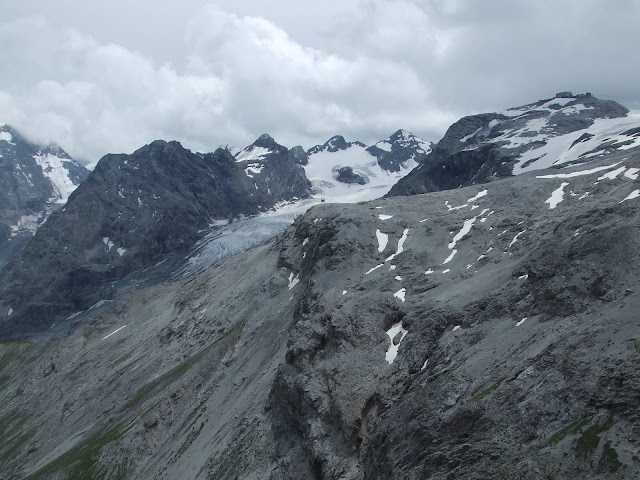 At the top the place was packed with bikers. This is a small selection.

I must admit, it was a bit hairy and I did hang on pretty tightly because while the bike didn't accelerate well onto inclines, it accelerated marvellously going downhill which meant braking hard at the corners, and my DB beat the frustration going up out on the road going down.


At the bottom we carried on over another pass where my DB decided he wanted a snooze. We stopped here next to an abandoned motel (behind) and he got out his inflatable mattress while I sat on a rock, read my Kindle and admired the view which I thought resembled quite closely the Lake District.
We crossed the border into Switzerland and discussed staying at either St Moritz or Celerina next door. I suggested the latter as I thought it might be less expensive. Whether it was or not I'm not sure, but it probably was, but it still cost the earth for what it was. We went to a hotel which catered for walkers, bikers, cyclists, families the lot, so it had dormitories, rooms and suites. The exterior of the hotel was finished in raw concrete in an industrial style that seemed to be quite popular from what we saw later.

The room was basic, decorated with stark black, grey and white speckled granite tiles, wood panelling on the walls, raw concrete on corridor walls and ceilings, and a bathroom walled off in red formica. There was no hairdryer or fridge and we paid 160CF for that. We should have stayed in Italy. My DB suggested we buy a picnic in a supermarket as the restaurants were bound to be exorbitant so we found a little corner mini-market and stocked up on cheese, rice crackers and black bread, plus wine (thank goodness). I got told off for dithering as I tried to make up my mind from the underwhelming display and felt rather despondent at the choice. Back at the hotel I asked for a bucket of ice for the wine which I was given and asked to return (!). We dined in the bleak room but did get through both bottles of wine. It was a fitting end to a frustrating (and grumpy) day.

The views were very pretty though, apart from the one from the hotel window onto the stone mason's workshop. 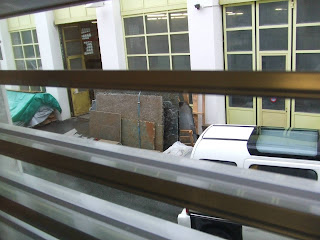