Back to Austria and Home

We awoke to another wet day. The stone mason and his staff were already hard at work, vans were coming and going, and we discussed what to do. Officially we had another day to go, so we could ride off and see more passes, get wet, take pics, find somewhere to sleep. Except that my DB had had enough and was a bit concerned about the bike.

I agreed that it might be best to go back to Au and return to Montpellier the next day, and that would give us a day to recover on Sunday before I had to go back to work. He rang the hotel, found they had room, so we packed up and headed off after giving back the ice bucket, and eating a reasonable breakfast that gave me no opportunity to make sarnies.

As we were so close to St Moritz, we went there first even though it necessitated a slight detour. The above picture does not show it at its best, I'm sure. It was wet and there was a lot of building and work going on. The centre looked a lot better, sort of like a Nice of the mountains with very smart shops, expensive cars and well-dressed people walking about carrying bags that had names like Prada on them.

We idled through St Moritz admiring the buildings, and I noticed more of the stark industrial raw concrete look, then rode back to Celerina and on north towards the Austrian border. 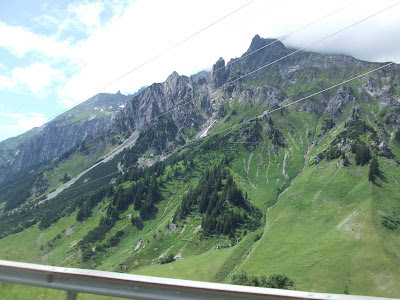 We went over several passes that day, this is the col of the Flexenpass at a modest 1773m.

We went through a number of rather snazzy ski stations, like St Anton. They were delightful, and very clean and smart.

At lunch time we conveniently reached the border with Austria and in the first town we came to, Landeck, found a biker friendly place for lunch. I had mushroom soup which was insufficient so added an apple strudel which turned out to be very stodgy and probably the industrial equivalent of the tartes au pommes you get in restaurants in France. Anyway, it filled a hole. What was great was that we could pay in Euros!

We went over a couple of other passes in glorious sunshine. Typical.


We arrived back in Au at about 5pm in time to jump into the pool and get pummelled by the jacuzzi bubbles.
I had a mooch in the village, bought a postcard for my mum that came with a stamp in a shop that sold natural products for face, body and health. I was looking for something for the boys but I was sure they wouldn't be interested in anything from there. I went further and found a little supermarket where I bought some wine, some of the delicious räss cheese which I asked for in halting German and lots of sign language, and some chocolate for the boys. As the post office was opposite the hotel, I wrote my postcard and could post it straight away.

That evening we had an enoooormous dinner at the hotel, and boy was it good. The entree was a tiny patty of beef tartare, then came a consommé soup, then we helped ourselves to salad from the buffet, then came the main course of a pork chop with potatoes, and then we finished up with dessert of a creamy fruity terrine. I waddled back to our room happy.

The next day I made some sarnies as we did not want to have to stop in a Swiss service station and buy some, loaded up the car and trailer and drove all the way back home which took about 10hrs.

Total distance travelled was 3200km - 1700 doing the return trip to Au, the rest around Austria, Germany, Italy and Switzerland. We had a terrific time, saw some fantastic scenery and rode some amazing roads. We visited the regions of Bavaria, Dolomites, Voralberg, Haut Adige and Carinthie. I'd love to go back.