Living in the Sticks

It was swelteringly hot yesterday. Our original plan had been to go on a motorbike ride up towards Mont Aigoual in search of a cool breeze, but the thought of donning a leather jacket, trousers and gloves was not a pleasant one.

After much dithering we decided to take the car. I mooched down into the village to buy some picnic goodies, essentially cheese and tomatoes. The tomatoes looked lovely, and so they should have. Four cost me over €4! Admittedly they were quite big (only 'quite', not 'very'), but at that price they would not go on the picnic with us. They required suitably appropriate preparation which I don't count as being slung into a plastic box and shaken about.

The cheese man was on form having found a wallet and was offering 'tasters' (like he does for cheese) - anyone for a bit of carte bleu? He didn't know whose it was as he hadn't dared to open it. He was waiting for the municipal police officer to take control when he would be able to say with complete honesty that he didn't know what was inside and therefore could not be accused of nicking the cash. I gave a passing thought to the type of person who loses his wallet, retrieves it thanks to an honest stall-holder and then promptly accuses him of theft even though no money has actually been stolen.

The most interesting cheese the fromager had on offer was dark green which sounds a bit dodgy. I tried it. It was made of cow's milk with pesto and basil, and was delicious so I bought a chunk along with some Saint Nectaire fermier. I turned them into sandwiches with some nice fresh Festive baguette and sweet onion.

We put the air con on and drove north towards Ganges. Then we carried on to Sumène and on a bit more up to the col beyond St Martial which is a cute village of stone houses crammed together on the hillside. My reaction to villages like this is usually 1) how do the residents live? 2) what do they do for a living? 3) how do their kids go to school (especially collège/lycée)?
This subject is foremost in my mind at the moment because we are looking to buy a house. It's a frustrating process because in relation to my work, for the same price, I can either have small and crappy but close, or bigger and nicer but far.

My DB tells me that lots of people have to travel a long distance to work, and their kids too to go to school, especially lycées which tend to be concentrated in large towns. Still, when you have been used to travelling 7mins to get to work and have schools on your doorstep, the thought of giving all that up to spend €170 on petrol per month driving 35mins each way just to get to and from work, plus having the boys change schools and sending one on an hour's trip to Nimes, just to have more space for a reasonable price is difficult to swallow.

I rent (expensively), but I have organised my life to be as practical and pleasant as possible. The penalty of wanting to invest and secure my future is living in a minable crappy little house as so many are in Languedoc (built badly in the 80s with no taste or coherent design), or completely disrupting my cosy lifestyle and that of the boys by moving away. As I'm greatly affected by my surroundings, a crappy house will depress me so there's no point, in my opinion, buying something for the sake of it.

So maybe I should take this opportunity to shake up my life, and that of the boys, but moving teenage boys away from a city is likely to go down badly. Conundrums, frustration and irritation - life has got very annoying just when I thought I had it taped.

After our picnic, we went for a short walk towards another col through a lovely shady wood made up of chestnut trees and pines, with bracken and pink heather. 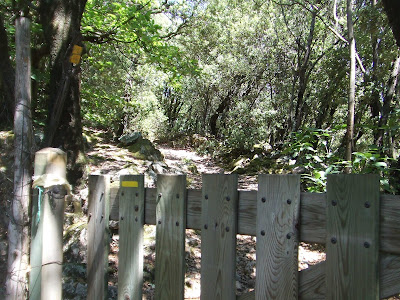 Having exerted ourselves nicely, we drove back via Ganges, St Hippolyte du Fort, Sauve and Quissac. There are some lovely villages and small towns along the D999 which skirts the foot of the Cevennes hills. At Quissac we turned towards Montpellier, and a good half an hour later arrived at Prades le Lez. An extra 5 mins and that would be my daily drive to work if I lived there. Hmmm.
Published at 9:41 pm