A Domestic in Paradise

Montpellier is 242km from Cadaqués, or two and three quarter hours by autoroute. Last half term holidays we took the autoroute as far as Perpignan, then came off to take the coastal road to Spain.

As I'm a bit susceptible to the cold, I was wearing my birthday pressie, an electric jacket. This nifty piece of clothing plugs into the bike battery and has wires running over the front and back. You wear it under the leather jacket to keep you warm as toast and as snug as a bug despite a biting wind and plunging temperatures. Was I happy to have it? Yep.

We made it as night fell and set off in search of a hotel. This was the beginning of November and some had already packed up for the winter. After some disappointment that the off-season prices were not lower, we found a 3* hotel that was pretty basic, but open. It was a depressing place, with cracked tiles in the room and no sign of refurbishment since it opened thirty years ago.

We couldn't get the wifi to work either, so went down to the centre in search of food and a connection. We found both in a pizzeria that served very average pizzas, and found out later (thanks to the wifi connection) that we should have gone to the place next door for a decent meal...

On our way back to the hotel, we popped into a mini market and bought some beer to consume in our poky little room. I had my Kindle so I'm always happy, and my DB finally got the wifi to work so he was happy too.
The next morning we went for breakfast in the dining area that had 'Do not take food out of here' notices all over the place, plus a couple of sentries standing guard to ensure we didn't sneak out a packet of biscuits. I had no chance to make sarnies, but wouldn't have been tempted anyway because the breakfast wasn't up to much. The only redeeming feature was the view towards the coast. We decided to leave.
Before we left though, we wanted to walk to Dali's house and visit it, leaving our stuff at the hotel. You have to book to get a ticket - no turning up on the day - so we went online and found 2 tickets for an hour hence - some of the time slots before were already booked up!

It was a 20 minute walk across to the village where we arrived to splendid views across the bay, and Dali's house snuggled in among the trees. It's in fact a row of formerly fishermen's cottages. He started off with a very basic one-room cottage which had a fireplace and a tiny living space. He took Gala there so they could experience an intense togetherness.


"The Portlligat Museum-House was Salvador Dalí’s only fixed abode, the place in which he usually lived and worked up till 1982 when, upon Gala’s death, he took up residence at Púbol Castle.

Salvador Dalí moved to Portlligat in 1930, into a small fisherman’s hut, attracted by the landscape, the light and the isolation of the place. Taking that initial construction as a basis, he created his house little by little over the course of forty years. He himself described it “like a true biological structure [...]. Each new pulse in our life has its own new cell, a room”."

It really is an amazing place with fantastic décor and a surreal, opulent look to certain rooms. Dali had a couple of mirrors installed in his bedroom which captured the early morning sun. He wanted to be the first person in Spain to see the sun rising, along with the lighthouse further down the coast, and to have the experience from his bed.

It's definitely worth a visit if you're in the area. We headed back to our hotel to pick up our stuff and ride across the bay to a hotel on the other side, much nicer place with a lovely terrace where you could sit and admire the view if it wasn't too windy.

We dumped our stuff and went for a walk to the little island. You can get there by scrambling over the rocks, and then get nearly blown off the bridge in the gale force wind. There is a reason why the sky is so lovely and blue with not a cloud in sight... 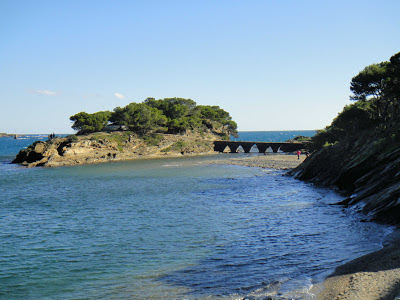 It's a cute little place, full of weird rock formations, the most incredible being at the head of the island, in the shape of a fantastic creature of the deep. 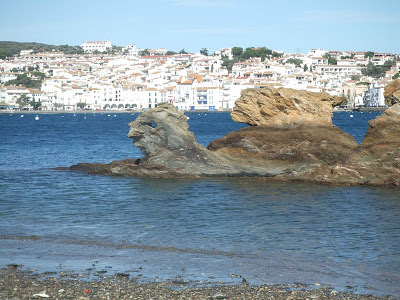 Our blissful little break was soured that evening by a domestic on the subject of food. It lasted until well into the next day, continuing during our walk that morning to the lighthouse. The views were fantastic but we were still being grumpy with each other. My DB entertained me with sarky remarks while I skipped up the steep bits in my new zumba fit state and waited patiently at the top just to be annoying. Funnily enough, there were storm clouds gathering out to sea in an appropriate reflection of our mood.
We were due to head inland towards Olot but we agreed that my DB would drop me off at Figueres station so I could take the train back. I started plotting pleasant things to do with the rest of my weekend...
Published at 5:08 pm