I left you in my last post with a cliff-hanger ending. My DB and I were in Spain, supposedly for the weekend, but after having something of a domestic, we agreed that he should dump drop me off at Figueres station and continue on while I took the train back to Montpellier.

So there I was on the back of the bike wondering what to do with the rest of the weekend, and feeling a bit aggravated. We got to Figueres and I started looking out for signposts to the station. Then we went over a railway track and, turning my head to the left, I saw a train station. I said nothing.

We continued through Figueres and took the road that leads out of the town towards Olot. Right on the edge of Figueres we came to a sign to another station, what seemed to be the main line. I said nothing, we didn't stop.

Oh, I thought, maybe I am not being dropped off. I'm quick like that. It was only when we got to that dump Olot that I knew that either my DB had forgotten I was still there, or he had decided not to drop me off. When we arrived at a traffic light, I poked him and said "I'm still here you know" to which he said "Come on, I'd never drop you off and bugger off on my own". I thought this was a) sweet, b) foolhardy cos now I know..., c) a bit cheeky because I may have made other arrangements although of course I hadn't.

So we agreed that it was better to continue on good terms and off we went. Olot was too much of a dump to spend any more time than it took to pass through, and we eventually ended up in the delightful town of Camprodon not far from Mollo.

We found a very cheap hotel which was also perfectly reasonable and booked to have dinner there that evening which was at 9pm (!). After a snooze, we went out to explore the town.
We soon came across this spectacular bridge which of course, we had to cross.
It was early Friday evening, and the streets were pretty empty. There were a number of nice shops about selling good quality stuff. Camprodon is not far from the ski resort of Vallter 2000 up the valley which attracts tourists to the area and contributes greatly to the local economy.
Our evening meal at 9pm seemed a hell of a long way off, especially as our last good meal had been breakfast where I stuffed myself as full of sausage, egg and cheese as possible from the buffet breakfast but had not been able to make any sarnies. So we decided to stop at a bar and have a tapas or two. It would have been nice to enjoy the view over the river from the tapas bar, but it was too dark, so we concentrated on ordering some Moska beer and slivers of local cheese.
The next morning the streets were a lot busier. We decided to stay another night, not realising it was going to be a packed weekend. We reserved and got told our room was the last one available - phew!

As it was a lovely morning, we went for a walk to Llanars. The tourist office had given us lots of bumpf on local walks and we wanted to follow one that took us along the river. We missed the path, of course, and walked along what must have been a mostly parallel one but which went up and down quite a lot. As all paths seemed to lead to Llanars we didn't need to stop and turn round but we did quite a lot more walking than we intended to.

There were a lot of new houses in Llanars, built in the local brownish stone. They looked very smart, and it was obvious there was quite a lot of money floating around here too. Very different from the scruffy towns that we passed the previous day, like Olot.

That afternoon we took the bike and rode along the winding mountain roads to Beget. Beget (great photos in link) is a totally restored medieval village that sits nestled in a valley, an absolute jewel of a place that is peaceful as well as stunning. It has a population of well under 50, but also a hotel and an excellent-sounding restaurant, El Forn where you can eat fine Catalan dishes (we only had a coffee...). 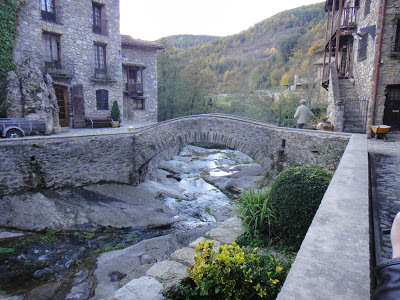 By this bridge we saw a little cat, and a boy. Suddenly I saw the boy seem to knee the cat violently, so I shouted at him. He seemed quite surprised that I intervened but looked a bit shifty. We hung around for the next five minutes or so to make sure he behaved himself. I threw over the odd stern look from time to time, just to let him know I was on to him, little sod. 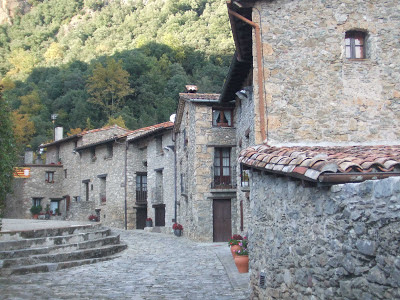 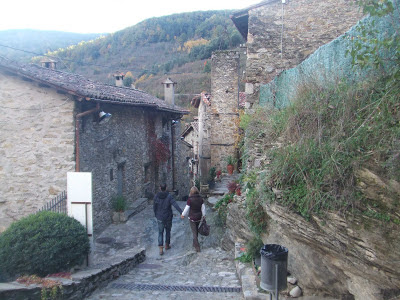 I get the impression it's an area where you can eat well, because not only was there the El Forn restaurant, but there was another one too, the Can Jeroni. On our way back we passed yet another restaurant, Can Po, that had a row of Porsche cars parked outside and delicious smells emanating from the inside.

That night, we couldn't wait for the 9pm dinner, so we got take-away pizza and ate them in our room with some wine. I saw the next day a sign in the lift (that we hadn't previously taken) saying 'no eating in rooms'. Oh well.

It was not the most gourmet holiday I've ever had, but it was certainly a mostly lovely four days in Spain, and we'll forget the domestic as a now extinct blip on the radar.
Published at 5:11 pm