Gone are the days when I went to Carrouf, ploughing through the aisles to do my weekly shop. I still buy essentials like loo rolls there, but I go elsewhere for food. One of my suppliers is called La Ruche Qui Dit Oui (The hive which says yes), or RQDO. It's a funny name but the idea is good. 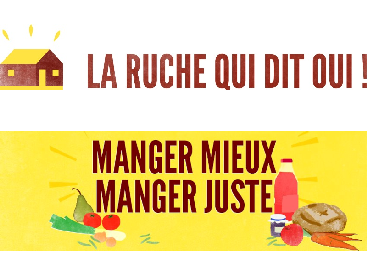 A reine, or queen bee decides to set up a ruche. RQDO is a national organisation bringing together a commercial website and local suppliers. It was set up by a couple of whizzo start-up entrepreneurs and is proving to be extremely successful.

The reine signs up on the website to create a ruche. She waits for people to join, which they do by hearing about RQDO and going onto the website to find their nearest ruche. While she's waiting, she searches for suppliers so that when she has enough members, she can go live.

The idea is that suppliers fix a minimum amount of produce that they want to sell before they will 'say yes' to the overall order. There's not much point using petrol to deliver five hundred grams of carrots. If their minimum order is reached, the sale goes ahead; if it doesn't the supplier cancels the orders.

For the consumer, you can choose exactly what you want from the list of produce. If you don't want anything, you don't have to order. At the ruche I go to, you can choose from organic veg, fish, meat, artisan soap, artisan biscuits, and jars of things like caviar d'aubergine and soup, and so on. You can also buy a box of veg according to season from time to time.

There's been a bit of a hoohar recently between the RQDO and AMAP organisations. AMAPs are a similar concept, but you sign up to buy a box of produce every single week, and pay up front or by trimester. It's brilliant for producers because they know they have a fixed consumer list, and can plan ahead for the year's cultivations. For the consumer, they can be reduced to a diet of turnips and cabbage during winter months.

I don't have an AMAP near me, so the decision about which to go for was taken out of my hands, but I'm pretty happy with the RQDO, and like the fact that I can talk to the producers when I go to the ruche on a Thursday evening, and have a bit of a chat.

Hardcore AMAPs fans have been accusing RQDO of being a dirty capitalist organisation consisting of hard-working reines who earn a pittance and evil entrepreneurs who are raking in the profits from their labours. The RQDO takes 16.7% of total sales, gives 8.35% to the reine and uses the rest to pay for salaries of tekkies and admin staff. The average amount earned by a reine per month is €400 apparently although I'm sure my local lady earns a lot less.

The internet was steaming with accusations flying left right and centre (here, here, here) from AMAPers while RQDO reines wrote in to defend their position, and one of the entrepreneurs replied on the RQDO blog.

It's basically a network that brings together thousands of people and multiple organisations, like associations, volunteers, and clients. These people can meet, work and do business via the RQDO which has 50 employees on an earning scale of 1:3. The company has an official status as a socially responsible business.

No system is perfect, but it suits me. This weekend I decided to try the kilo of fish to make into fish soup. The fisherman gave me a polystyrene box of mostly tiny fish, and the recipe, and I made a start. He told me I had to cook the fish and then remove the flesh from the fish. I don't know if this is actually what you should do, but imagine me standing over a hot pot fishing around for very small bits of body and head, getting spiked by vicious bits of bone, and burnt fingers. It took me over half an hour and I was vowing never again would I make a sodding fish soup.

It tasted delicious though, especially with the rouille that I made to go with it which is a fiery mayonnaise. My DB, who moans when I cook fish, was in heaven.

Having looked it up (belatedly), it seems that I just had to put the whole lot through the blender and then sieve it. Have you ever tried to make your own fish soup?
Published at 9:47 am