Saturday May 23, 2015 was March Against Monsanto day. People from 35 towns in France, plus hundreds of others elsewhere in the world - spanning 48 countries - marched against this pharmaceutical multinational giant to promote awareness and interest in the World Health Organisation's declaration that glyphosate-containing herbicide Roundup, made by Monsanto, is a 'probable carcinogen' in the food supply. Glyphosate has been detected in groundwater supplies as well as rainwater collections suggesting mass pollution on a global scale.

Added to that their production and tyrannical selling of GMOs, their obstruction of measures to label products containing them, and hard core lobbying, Monsanto obviously puts profits before people, the environment and health, so we demonstrated to tell them and the Powers That Be that we don't want their poison, we want healthy food for all. 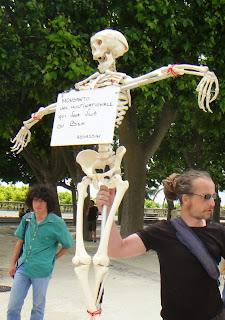 Our demo started off in the Peyrou gardens at 2pm. Not quite 2pm, obviously as this is the south of France and things never start on time. We eventually headed off half an hour or so later to the sound of drums, a flute, and chants of "Mon-san-to, A-ssass-in".


The numbers started building up as more and more people joined in. Ages ranged from students and teens, to parents with young children, and middle-aged and beyond.

How many people do you reckon the photo above shows? The police declared us to number 300. Rue Foch is about 400m long, and it was packed with demonstrators. I respectfully suggest that the police numbers are rubbish. There was more like a thousand of us, if not more.

This was the first time I've joined a demonstration. If my memory serves me right, which is not absolutely sure. It was great fun because there were no trouble-makers, and we all enjoyed making lots of noise and holding up the traffic. 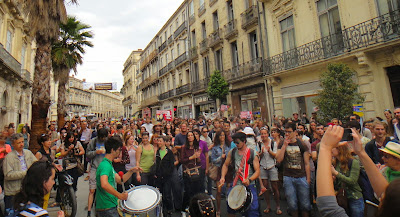 We handed out leaflets to passers-by who were generally happy to take them and took lots of pictures of us too. 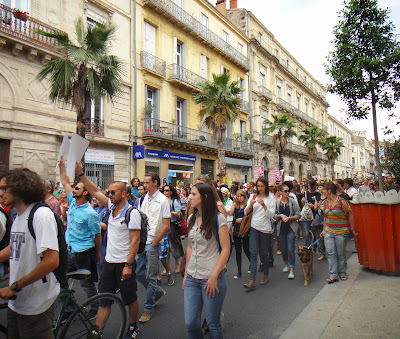 I just hope no one missed their train because we held up the trams...
Even though people were blocked in trams, they did not look nastily at us, but waved and smiled.
We eventually arrived at the Place de la Comédie where we gathered round MacDonald's with the big yellow Greenpeace OGM banner, and yelled a collective 'Boo'. There were several people eating outside who took the 'entertainment' with good humour even though a woman was dancing around with a smoker and puffing smoke over them.

We then moved on to Quick and did the same. Most customers took it well, but one group of a certain religion (I'll leave you to guess which) headed by a woman in a leopard print blouse didn't appreciate the smoke being blown over a podgy lad. He had been tucking into his burger and stopped, open-mouthed to stare at us when we arrived. The purpose of our demo didn't interest Ms Leopard-print in the slightest. She took umbrage, berated a nearby member of staff and got her little family together to flounce off, gesticulating like mad in her fury. I don't think we got our message across to her...

We didn't get our message across to the media either. No one from the tele was there, and there were just brief articles in the newspapers. All played down the numbers and therefore the importance of the issues, and the degree of feeling among the demonstrators. I think they lumped us into the loony-lefty-minority-Occupy box, as though everyone else is delighted at the idea of eating toxic food and drinking poisoned water.

Still, hundreds of people saw us demonstrate and got the message, and every person outraged at what Monsanto does is a victory. I expect Monsanto bosses eat 100% organic and wouldn't touch GMO corn if you paid them. Hypocrisy among big bosses and politicians is well established.
Published at 2:20 pm