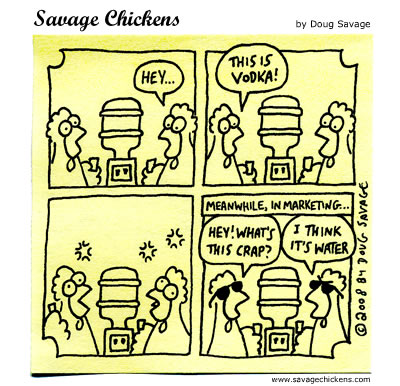 Back in September I blogged about Ekeo, the water purifying company which seemed to have gone bust. This week, I had a guy call me from a different company asking to come and see my installation.

When he came round, he asked me how I knew they'd gone bust so I replied that their website was down and no one was answering the phone. Ergo - trouble. He was surprised that I knew. Seemed obvious to me.

Anyway, he told me that the company had run into trouble with the financial partners. They had wanted the company to diversify, and it was in the process of doing this, with all the bits under the one name, Ekeo. French administration is very long, and before the statutes to change the names of the different bits came into force, the financial partners pulled the plug and all the bits with the same name went down the hole. An unfortunate situation, and a lesson to us all: Proper Planning Prevents Piss Poor Performance.

Naturally, this guy had come to sell me something. He certainly wasn't coming round out of the goodness of his heart. They had recruited several of the Ekeo former employees who came, customers files in hand. That's how they got in touch with all the Ekeo clients to tell them that their system was crap, maladapted to the local water, and that, for a mere couple thousand Euros extra, they could have the NEW system all shiny and bright.

Predictable? You bet. Apparently, one of the problems with the system is that one of the filter pots splits and breaks. Mine hasn't... yet. I said that if it does, I'll just throw out the system and reconnect the water supply to the original water pipes. I've had it with water softeners. The whole thing stinks of arnaque (con).

The guy left saying I had a charming voice on the phone and even more charming face to face, and he wished me a happy Christmas and later rang to tell me how I could improve my drinking water filter system. If he rings again, I'll get worried!

Happy Christmas, everyone. I won't be blogging for a week, so enjoy the silence.
Published at 10:51 am