The rather nice restaurant where I was expurgating my stress post-Ikea the other day was in old part of town. My TWDB and I had intended to dine at L'Atelier where they seem to do fun things with edible flowers because Madame is a botanist. Unfortunately, there must have been some sort of a soirée going on because they were hanging out of the windows and standing about in the chill.

Plan B was to backtrack and go to try the ex-Menestrel, now Divine & Sens. Apparently the Menestrel owners decided to pack it in because of the difficulties of making a decent living, what with the 35hour week, VAT, social charges, parking problems, and the development of out-of-town complexes where restaurant food chains attract a large clientele. 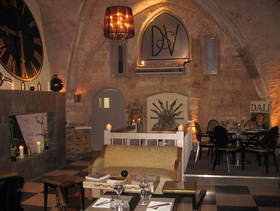 Newly open - just one week old - we were pleasantly surprised by the decor. From being traditional, red, practically medieval in style, it had gone to being baroquely chic, trendy and modern. As you can see from the photo, the main dining room is absolutely splendid with its vaulted ceiling, all in a beautiful creamy local stone. The chessboard tiles are enormous, and there's an even more enormous clock face set permanently at 9.30 over the fireplace.

The welcome was warm, but a tad unusual. I think Monsieur le patron had been relieving his own stress in alcohol and, while he was still on his feet, his manner was not quite what you'd expect...

Madame, on the other hand, was perfectly in possession of her faculties - at least at the beginning - but, whilst charming, was having to cover somewhat for her errant husband. This included removing the bread basket with a half-eaten roll that had been plonked on our table. When I asked her if he was feeling okay, she replied that he was, so I suggested that he wasn't exactly quite comme il faut. She knew what I meant, but merely smiled.

Well, he was nothing if not amusing, but this is a restaurant with a menu at 29Eur for two courses so you expect a professional approach. Having broken the ice with my observations, towards the end I engaged Madame in conversation about decorating the stone walls of the restaurant with artwork from Promo'Arts. I plugged away, even had a card to give her, and got her sounding quite enthusiastic!

We did enjoy our dinner actually. I had a carpaccio of duck with salad followed by scallops with crystallized ginger and various veggies. My TWDB had a plate of vegetarian tapas. We washed it all down with some yummy Domaine de Mortiès from nearby St Jean de Cuculles.

Downstairs there is another room which can be hired out for functions. It has a rather kitsch dentist's chair upholstered in zebra and a collection of chairs and comfy sofas. Madame would like to use it to pursue her other passion - fashion - with catwalk soirées of trendy, chic clothes. Sounds cool!

I hope the restaurant works. Obviously there are teething problems, but the concept is good, and I love the table decorations and the friendly ambiance of the place. I quite wanted to walk off with the table mats. They are woven metallic, old gold in colour, set on a black table with white napkins. The cutlery is stylish Guy Degrenne and the glasses are huge.