On Day 2 of our weekend to Mont Ventoux, we awoke to this view, a mountain of giant's teeth. Looking down, we could see this colourful blend of autumnal shades. The river was just on the side of the bushes on the right. 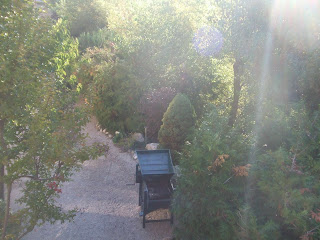 After an industrial breakfast (in quality not quantity), we set off to buy food for lunch so we wouldn't be restricted to dodgy sandwiches at vast expense. We popped into Buis les Baronnies for cheese at a fromagerie, fruit and butter at a little épicerie, and some cooked meat at the charcutier at the end of the road in this photo. I love the way the sun picks out the bright clean colours on the buildings on the right, and leaves the grubbier ones in the shade.

Content in the knowledge that we wouldn't starve, with 2 lots of bread, jambon sec, ham, cheese, pears, and apples, we headed off along the green roads. The scenery was stunning, but far from being 100% picturesque. From the bike, I managed to take a couple of photos of a dreamy hilltop village with the prosaic evidence of sewage and rubbish reality much in evidence. 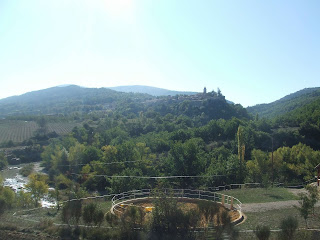 Even pretty villages have to deal with poo... 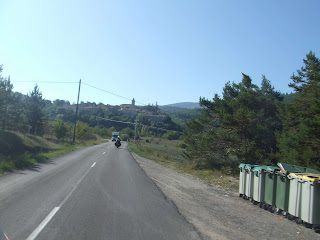 Our next stop was the Col de Perty, another favourite with cyclists. We passed several, but very few cars. It was lovely and peaceful. From the other side we could see over to the ever-present Mont Ventoux. 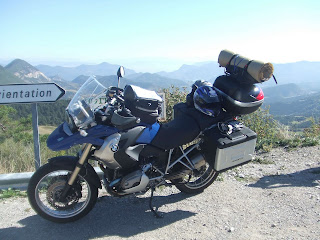 The road down turned and twisted, and put much pressure on the brakes, again. My TWDB had greatly enjoyed the wine the previous evening and took the challenge of the road with much care and attention. 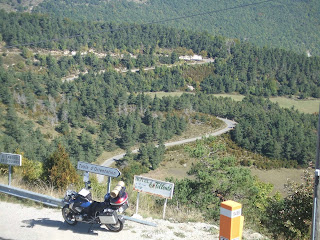 We were soon thinking of lunch, what with seeing bikers picnicking... 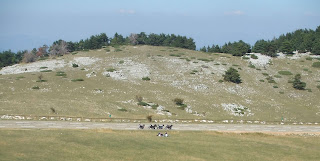 and decided to look out for a suitable spot. A quick inspection of the map gave us the idea to go to the Gorges de la Méouge where we afterwards separate from our friends who would head back east while we would continue west. On the way there, we passed through a village where the cliff sides were dotted with lines of little figures in red. The local climbing association is evidently well-supported. 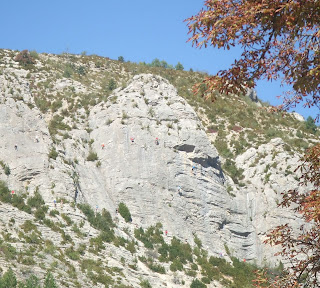 At last we found the ideal spot, next to the river, with views across to the other side and the dramatic  formations of tortured limestone... 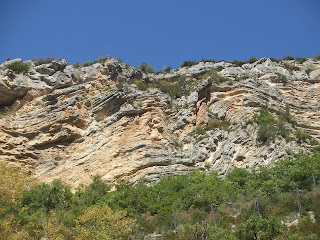 ...and angles of rock strata that are best avoided looking at after a heavy night if you're not too sure which way is up. 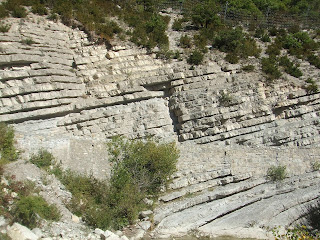 The sandwiches we made, with lovely fresh bread, delicious ham and tender tender cheeses were vastly superior to the muck we'd endured the previous day. We even had as much butter as we wanted. The river burbled happily next to us, and all was peaceful under the shade of a handy tree. We had crossed to the other side of the river to get to the shade, balancing precariously on wobbly stones and jumping from one to another hoping they were solid enough not to topple over. The river was nice and shallow, but wet feet in boots are not much fun. After assuming we had a knife, we discovered that it was of the emergency, 4cm blade type, so our sarnies were suitably rustic and appropriate for the adventurous biker.

After lunch we hopped over the river again, not without accident, said good-bye to our friends and roared off, revived, along the rest of the gorges. We decided to take the autoroute at Avignon, so made our way towards Gordes. On the way, we came across a pretty little village, Murs where a large number of smart German cars were parked and the owners were having lunch sprawled on sheets under some trees. We wondered if they were the owners of the dinky houses and had converted the village into a German enclave.

Also on our way was one of the Plus Beaux Villages, Venasque which we popped into to have a quick look. It was perched on a cliff top and was pretty impressive. At last we reached Avignon, and, by this time it was baking and we were rather tired, so were happy to pound our way back home, and collapse onto the sofa.