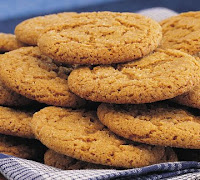 It was carnival day this morning at my youngest's school. Carnival morning, I suppose. My boy flatly refused to participate despite having prepared it for some weeks so I took him to his mountain bike club training as usual instead.

You might be shocked and appalled at such a lack of maternal implication in his school activities, but frankly, now that he is bigger, I can relax because I find the whole kids' carnival thing utterly, but utterly, boring. You stand around watching a bunch of small kids not your own do stuff and then when yours appears, he looks like he'd rather be somewhere else and is half-hearted about the whole thing.

So why did I go along without him? To help my pal out selling goodies on the food table. My youngest and I even made some gingersnaps last night to sell. I'm not a total dead loss, see? So there we were, with a bunch of flapping French women who were having difficulty organising themselves out of their paper bag. No one knew anything basically.

A granny with a small child in tow came up to me standing behind the tables ladened with food, and asked me if she could have a piece of bread for the small child. There was bread in vast quantities at the other end of the table, some of it cut ready for the hotdogs that would be on offer later. I said she could. When she went down to the bread to take a bit, a bossy French mummy appeared from nowhere behind me, rushed over to this granny and told her she couldn't have a piece of bread for the kid. I didn't hear what she said but how petty to refuse a bit of bread. It's not like it would make or break the school's finances, and this granny was probably doing the parents a favour looking after the small child while they watched the bigger one strut his stuff in the carnival show. This is the sort of bossy mummy who can cut through carnival joy like a knife through butter.

Unsurprisingly, this is the school that has two warring political parents' associations. They are full of these bossy mummies who don't get on and bitch about each other as soon as a back is turned. My pal wanted to help out because although she belongs to one party, it was the other organising the food tables, and she wanted to show she doesn't give a shit about politics, but she does give a shit about the school. Some hope.

Trying to get anyone to include her in the set up was a challenge. Emails were not answered, neither were calls. When they finally were, they were short to the point of rude and it made the idea of giving a hand rather a tedious business.

This is normal, however. Another friend has been trying to take a group of 5 sick children on an outing during the holidays. She encountered total indifference everywhere. Emails were not answered, neither were calls. It made the idea of helping some kids have a jolly time just for a day rather a tedious business. Finally ill health has forced her to cancel, but she probably would have had to do so anyway. Oh, people say, c'est la crise.

So there was me, tagging along for the ride at the school. We didn't actually get to help. In the end there were enough bossy women there and my pal was told to come back every 25mins to check. Yeah, right. I saw my gingersnaps being put out, which was a shame because I rather hoped they'd be overlooked and I could take them home again. I wonder what happens to the stuff that isn't sold... I didn't intend to hang around long enough to find out, that's for sure.

What did I actually do? Caught up on all the gossip with my pal. Watched a bunch of not my kids do really boring stuff round and round (theme Chile, said my son, you know, mummy, the ones who lived in the wrong place and got wiped out by a tsunami. Hmm... Not quite, son. In fact the theme was the Andes), wearing different permutations of table cloths, cut up rugs, beach towels etc. for ponchos. Then they all threw confetti everywhere and had a lovely time. I was glad not to be on the cleaning up team.

Eventually we left and I went to collect my son now covered from head to foot in mud, bike included. That's what I call a good morning's fun!
Published at 3:13 pm