My DB and I have just come back from over a week away. Du jamais vu! Yes, from Wednesday to Saturday ten days or so later we were over the hills and far away in (Corsica and) Sardinia. It was a marvellous break because Sardinia is so beautiful with such varied scenery, and it was amazing to have a so much time away together.

We went on the motorbike of course - Sardinia is a biker's heaven, with great roads in good condition and not too much traffic especially out of season. I packed my capsule wardrobe into my faithful little blue and green bag that my parents left after one of their visits many years ago, and is the exact size of the BMW side case. I'm getting good at it, but didn't know whether the evenings would be warm enough for a little top. They weren't, so I took two tops too many, a pair of black trousers too many, and over-packed a black jacket which I wear with the little tops and black trousers. But apart from that, I wore everything!

We rode to Marseille port, got on the overnight Corsica ferry and had a delicious dinner from a buffet starter, then really good pizza, and wine. There was also a menu for just buffet starter and buffet dessert which, with hindsight would have been better as the starters were so tasty, and I was looking forward to having on the boat going back. Just my luck that it was a different boat and company, and we had to use the motorway service station-style caff. Disappointing!
The ferry deposited us at Isle Rousse (top left), so called because of the brilliant orange colour of the rocks, and we rode off in search of breakfast as it was only 7am. I was also looking for a bar with wifi as my son had badgered me just before we left (literally, like 5 mins before!) about some shoes he'd received from Brandalley, didn't like, and wanted me to buy some more. I was so not in the frame of mind for buying shoes on the internet, so told him to send me a link to the ones he liked. He suggested I give him my credit card details and website login so he could do it himself. Nice try, son.

So it was that I was sat in Calvi, at a bar overlooking the lovely little port with my café crème and croissants battling with Brandalley. I made the transaction and didn't notice the delivery date. When I did, several hours later at the hotel, I realised summer would be practically over before the shoes arrived and had to call to cancel the order. The things one does on holiday!

We took the tourist coastal road south. It was full of pot holes, repaired pot holes, newly forming pot holes, and pot holes upon pot holes reproducing like rabbits. The weather was a bit hazy but not actually raining.

We stopped for lunch at Porto, bought some last minute just before it closed at midday supermarket sarnies and crisps and sat on the pebbly beach to eat. The pebbles were many and varied in colour and degree of speckling. Wet, they were a riot of colour. 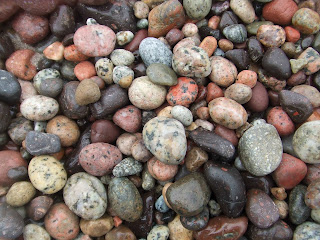 So we had the port to our right, a look-out tower set up on a jutting rock just in front of it, the lovely blue sea before us, and some impressive sheer cliffs to our left. They had many a ring and other device for fixing climbers' ropes up the impossible-looking rock face.
The pink granite rocks at the water's edge had been weathered into fantastic blobby shapes, as though a giant child had thrown down dollops of melting marshmallows and they'd set solid.
We continued down, came across a bevy of Porsche 911s. The Owners' Club must have been having a day out because there was a good 40 or so of them. Some were speedier than others and went zooming off with a satisfying roar along the narrow winding roads. Luckily they met no one at the dodgier corners... My DB's sap rose, the adrenalin flowed, and he roared off after them, with me not taking pictures from the back...
Ajaccio came and went, and we stopped a few kilometres south at Porticcio, just off Agosta Plage at the Kalliste Hotel. Our room was an apartment kitted out from Ikea, with views towards the sea. It's practically brand new and a little bijoux. We had to dine out though as there's no restaurant. The receptionist recommended the Auberge de la Ferme just down the road. We walked there, got lost, had to call for directions and found it behind the Radisson at the end of a side road full of building materials and up a hill. We were a tad ratty by the time we arrived.

Still it was worth it, for the best veal daube EVER. It was tasty, tender, not full of smoked bacon or too olivey (like daubes often are), but just a perfect harmony of taste and texture. Pure bliss.