Motorbiking to Italy - the French Riviera

Better late than never, I have finally got round to Italy. With my sieve-like memory there's no way I could remember most of what we did or what happened, apart from the couple of "misunderstandings" which took the shine off a couple of days, but at the time I wrote a trip report, so I can just dip in and pick out the highlights.

It's a long way to Nice from Montpellier. On the autoroute it takes four and a half hours. By the road it takes all day which is why we split it up into two. We took the dearest little ferry across the Rhone at Barcarin near Port Saint Louis, which has been in operation since long before WWII. On the other side we should have turned left, but turned right by mistake, which took us to a dead end at the sea 7 km later and a huge packed-sand car-park where a sand-yacht was being hurtled along in the strong wind. There were only a couple of cars of visitors braving the wild woolliness of the weather, one of which was having fun doing hand-brake turns.
I've done the same in the car-park at Espiguette which is also made up of packed sand, but that was years ago when I had old cars I didn't mind throwing about... Fortunately, my DB didn't have any desire to muck about with his heavily-packed bike with me behind, so we turned around and rode the 7 km back.

Crossing Marseille was fun. They've instigated a one-way system along the Vieux Port so you can't drive along it going west to east which means going round the houses, getting lost and almost losing one's temper as one tries to get back to the corniche and the Prado. The last time we were there was when we took the ferry to Corsica/Sardinia and back. Happy days.

Having negotiated our way out of Marseille successfully, we managed to find the route de la Ginèste, which is the lovely scenic road between Marseille and Cassis. It goes over the cliffs and is a much more exciting ride than the normal road. It's also the scene of an annual run apparently too. Bet that's knackering!

Cassis was disappointing. It was as cute as ever, but our hotel was over-priced especially out of season, and the best restaurant on Trip Advisor that we found was just average. The red Château Minuty that we had because it was a tad chilly was nothing like as good as the rosé which is excellent.

The route des Crètes, however, from Cassis to La Ciotat was anything but average. 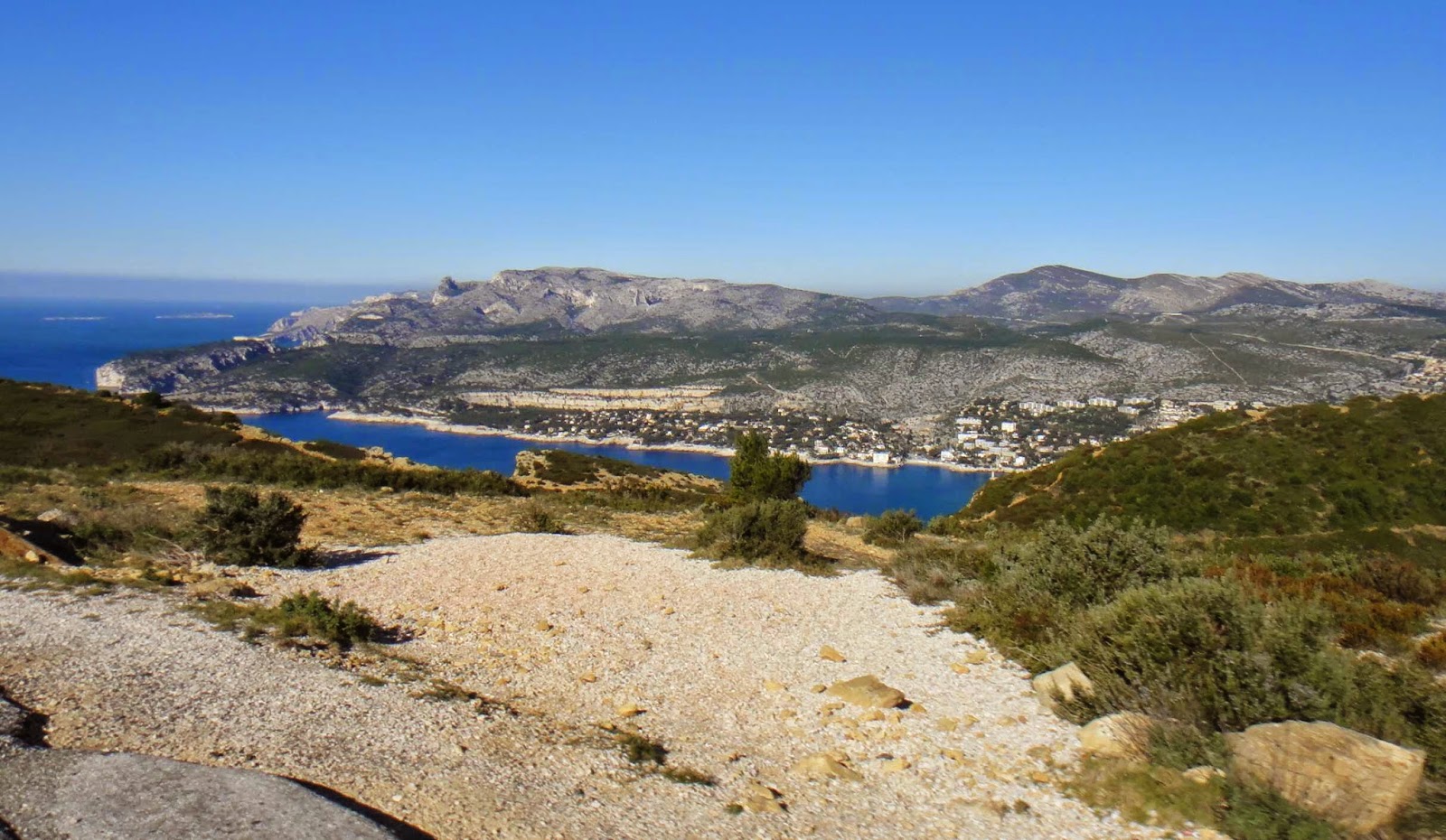 Fantastic road, glorious views of the coast, cliffs and blue sea, glimpses of coves and calanques, and the dramatic Cap Canaille.

I believe that the seafront road of La Ciotat is very pleasant to ride or walk along, but I couldn't tell you precisely because it was Sunday which meant it was closed off to make way for a market, pedestrian traffic only. What with that plus other roads closed for works, it was a miracle that we found our way out.

And it wasn't just La Ciotat either. Every single seaside town had closed its most attractive road. It meant that we missed the best parts of the towns with the views over the ports and marinas, and had to be content with back streets and unattractive neighbourhoods. As this was one of the days we had a misunderstanding, riding along in stony silence... it didn't exactly lighten the ambiance... We were not 48 hours into our holiday either. That has to be a record!

It was only as we reached the Cote d'Azur at Bormes les Mimosas that the road became enjoyable again what with the flowering mimosas on either side followed by the craggy red Esterel mountains.
We rode along the coast through Saint Tropez, Sainte Maxime, and Fréjus but decided not to join the crawling vehicles as they stopped and started their way through Cannes. We took the autoroute to Villeneuve-Loubet just outside Nice and stopped chez my DB's best buddy. There's an amazing marina resort there with a stunning curving apartment complex and shops/restaurants at the bottom. We got our sensible hats on, talked out our differences and had a lovely evening which included dinner in an Italian restaurant at the marina.
Published at 9:37 am