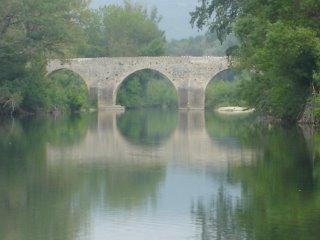 Enthused as I was by the Camping les Cascades, I returned there this weekend with all the family including my parents. Numbering six, we rented the super deluxe mobile home 'Titania 3' with three bedrooms and all new, clean and comfy. We were located diagonally opposite to where we had been the last time, and no campers ventured our way, so the inhouse entertainment was not so varied. This may have been a good thing as there was a group of happy campers who were there to have 'a good time' together, which means, of course, to have a piss-up.

Our host was as charming as ever chatting about how he is putting the miniature village attached to the campsite up for sale on Ebay together with the antique farm implements. It's too much apparently being in the 'Accueil' of the campsite and trying to ensure people don't nick the santons and other bits from the village. He also told us that it is, sadly, his compatriots who are the worst at stealing from the mobile homes. Some people just seem to have an attitude that if they have paid to rent a place, they are entitled to take home souvenirs other than photos of their stay. Selfishness seems to know no bounds or pits. 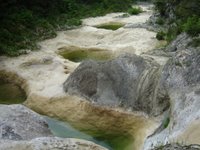 This time we made it down into the Concluses although most of the water had gone in the short time since Easter. It was a steep descent into the ravine which the boys enjoyed greatly, pretending they were on an expedition in the jungle forests with party leader and backup staff. The elder members of the party took an easier route along a pebbled path which gently meandered its way down to a bridge over the riverbed. The limestone rock has been carved into deep pools by swirling ages of water and sculptured into interesting forms over the eons of years of its existence, all vegetation scraped away by the rushing of the river. We made our way along towards what would be a waterfall in wetter seasons with a deep pool on the other side and a rock smoothed by the pounding of water landing on it which bore a remarkable resemblence to a pair of buttocks.

That morning we had visited the market of Pont Saint Esprit, apparently the longest in France, being 1km long. People packed the walkways buying the usual fruit and veg, also saucisson, fish, meat, tablecloths, plants, herbs both dried and fresh, olives, tools, cheeses, clothes of varying states of weirdness, saucy female lingerie and cute artisan-made kiddy clothes which I thought were infinitely charming. We bought a kilo of locally-grown asparagus, Garriguette strawberries (the ones with taste), a hot roast chicken and veal roll, olives, fresh peas, and 5 fresh trout. It was an amazing experience and we mused on the sheer vastness of the market over a much-needed coffee in a café overlooking the goings-on. The woman at the next table handily left, trundling painfully off, and we able to expand ourselves, having removed the disgusting ashtray full of about 10 fag ends of rolled cigarettes. She had sat there coughing as she smoked, her skin was leathery and she was a fantastic example of what smoking does to you. I did not hesitate to point this out to my eldest, just in case...

We left the campsite after lunch, having seen the cascades again, and swum in the solar-heated pool. We headed towards Anduze and the Bambouseraie which is celebrating its 150th anniversary. It is one of my favourite places in the region, and we normally visit it on a day trip taking in a ride on the little train from Anduze to St Jean du Gard and back again. This time, however, we had to drive there and fight our way into the carpark with what seemed to be most of the regional population both visitors and locals. 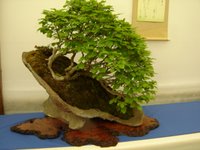 It also started raining, but we stuck it out and the rain stopped to provide a suitably muggy atmosphere, just right for a trek into bamboo country. There were various additional attractions to celebrate the anniversary including an international bonsai competition by the School of Bonsai Art. I have never seen such an impressive display of bonsai trees, which included mini forests, and trees set on a slope of rock and moss. 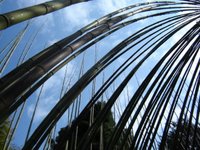 Another new feature is the Dragon Valley; a zen garden in the form of a dragon, and various works of art including a bamboo dome made with 150 bamboo trunks by Tieri Lancereau-Monthubert.
The Bambouseraie is a fabulous place to visit, has a fantastic shop filled with delightful things made of bamboo including a tee-shirt so soft it feels like cotton wool. You can buy the perfume Bambou made by Weil, various implements for the kitchen, books, decorative items for the house and even bamboo flooring. The garden centre offers several sizes and shades of bamboo and other plants including citrus fruit trees, pots and bamboo water features.

My youngest declared he wants to live in the Bambouseraie, which, for a 5-yr old is some recommendation! Best seen, for boys, in conjunction with the steam train and picnic lunch for maximum fun.

The trout, by the way, were fantastic, the asparagus to die for, and the strawberries pure delight.
Published at 5:42 pm