Actually, I had to post this one while it's still fresh, like fish. Today is the summer solstice and the fête de la musique all over Europe it seems. I was commanded by my eldest to watch a choral rendition in which the mother of one of his great pals was singing. It was all happening at St Gely du Fesc, thank goodness, so we didn't have to trek down town and then lose each other in the densely crowded, narrow streets. Been there, done that childless, and now have an aversion to being a little (5'3) person in a forest of giants with elbows, trying to hang on to small hands and ignore whinging ("Mummy, I'm thirsty; mummy, I'm tired; mummy, I'm hungry; mummy, I want to go home now; mummy, is it time to go home?" etc).

I can't say my son wanted to attend for the pleasure of listening to some music, but more as an excuse to see his friend with whom he'd just spent the afternoon, but wouldn't have seen for all of 1.5hrs.

Did it start on time? Do these things ever start on time? No, and, not in my lifetime. The choir numbered about 40 with 18 men, an achievement in itself. They were dressed in red and black so very snazzy. I don't know if the women were wearing matching lingerie, although being French, they should have been if you believe half the rubbish coming out of the nauseating British press about how bloody marvellous Frenchie women are.

Anyway... looking around, I was not able to detect much sartorial elegance. It has to be said, however, that it was a heavy 30°C and everyone looked like comfort was more the primary consideration than impressing the gallery. I was standing next to a guy who didn't seem to realise that he was immensely tall and solid because he stood at the front of the audience thus blocking out my view and that of several hundred others behind me... He finally moved to deal with a stray child, and a woman smelling of rhubarb took his place. Eau de Rhubarbe must be a new fragrance - fresh, fruity, original; can be worn with or without custard. 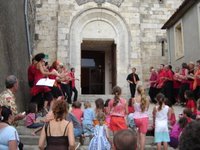 The choir was definitely enthusiastic, and at times pretty good. They were singing outside in front of the church, so not the easiest of venues, but they soldiered on manfully. They sang us a selection of popular songs, some with jigging about and dramatic gestures, in a relaxed, joyful way. They obviously enjoyed singing together, and their choir mistress had brought out a lot of fun in the songs.

The boys were sitting on the steps listening and then, as it went on a bit, got up to make mischief. Down in the gutter, their friends had discovered a dead bird and were rushing to and fro picking flowers off climbing plants to give it a colourful burial. I'm sure it was most appreciative...

The choir finished with a fine rendition of 'Amsterdam' and then the whinging started about being thirsty and wanting/not wanting to go home. Squashing orders were issued and the Gameboy was brought out to sulks on the steps.

We could have stayed for more music, but I had promised the Great Grandmother (91) that we would not stay out too long, my youngest, naturally had acquired a bobo, so we trundled off to a refreshing G&T.