One for sorrow, two for joy 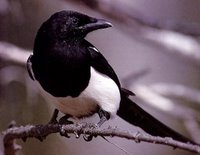 How many people can't see a magpie without singing the ditty from the children's show 'Magpie' to themselves? Probably all those under 30, or whenever the show came off the air.

I have not been counting them, even subconsciously recently because the only thing I wish to do right now is take an air rifle to them. The evenings here are deafening, and it's not because of joyous footie fans. We have the racket made by billions of cigales and the screeching hysteria made by a number of magpies who are singing their songs d'amour in the pine trees opposite the house. I tell you, last night we had to almost shout to make ourselves heard above the din.

Then again this morning those wretched birds started squawking at dawn which is horrendously early, being only early July. I kept telling Ulysse to go and do his cat thing, and catch himself some breakfast, but he just looked straight through me and went to guzzle his Hills Science Diet. Pah!

What with this auspicious start to day, I compounded the irritation by going to the Prefecture to register my NEW (YAY!) car and came back empty-handed because I had forgotten to take the Controle Technique. I must be going mad, and it's all those pesky birds' fault. Well, it isn't, but it's nice to blame something else... I mean, I've even BLOGGED on the subject. You'd think I'd have grasped an understanding of the papers I needed to take. So now I'll have to do it all by post. Oh well, it could be worse... my mouth could erupt out in a whole new batch of ulcers...
Filed in: Magpies Cigales Car
Published at 11:54 am