When one thinks of a sportsman (or woman) one thinks of a lithe body, taut muscles and flat belly. The quantity of muscle depends on the sport although you can have too much of a good thing (in my opinion) - think body-building.

At the other end of the belly scale you get archers. Now don't get me wrong, I'm not saying they aren't sportsmen (or women), but if you passed one in the street you wouldn't look twice. Maybe that's not fair. Okay, if you were on the beach and noticed one jogging, you wouldn't think 'oooer, phwaaar, there goes a god!' (like I did when I saw a couple of sportsmen participating in the Mediterranean Games a few years ago. Every female head turned and watched them go past, in admiration. I can't say what the male heads were thinking however, but it probably wasn't too pleasant...) No, you'd probably think 'oh, poor sod, yeah, I hate jogging too...'

While they may not be joggers, however, they compensate by having a steely eye and steady hand. This weekend the European Archery Championships were going on in Nimes. My youngest loves archery and has broken many a toy bow, so I thought it would be of general interest and a nice outing to go along and have a look. I hoped that there would be activities to interest budding archers, like an area where children could have a go, and stands selling toy bows and arrows.

Some hope. This was a serious affair, for serious archers. We started off in the stands area. It seems there are two main types of bow: the long one; and one with pullies. Did you know a pully bow existed? No, neither did I. It actually looks like an instrument of torture, or a device for getting stones out of horses' shoes (joke). Having looked it up, I realise it's called a 'compound bow', for obvious reasons. They are futuristic developments on the standard bow which is long and elegant, and were being used alongside standard bows so it must just be a question of preference.

One Korean company was advertising their bows, made of carbon fibre as suffering from only 0.1% breakage. Normal breakage is 3% apparently. At over 400Eur a bow, that's quite something.

We looked out for a kiddy stand, skinning our eyes for a little frivolity amongst the seriousness of carbon fibre bows, stabilisers, arrows, arrow-making equipment, arrow-holders, hand protectors, visors etc. I felt the organisers had missed an opportunity to attract young blood and decided to tell them. The boys were very disappointed that the only thing they could do was observe. They like action!

I found the French Federation and asked for a list of archery groups in our area. They didn't have one... I then suggested that there should be something to attract children. I was told that there wasn't really room (pah - rubbish) but that the World Cup was taking place in June (23-28) near Toulouse (Boé) outside, and there I'd find activities for children. 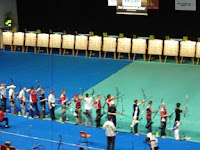 Totally unmollified, the boys and I went to watch some of the competition. Inside a sports-hall, a line of archers were practising. They were very close together it seemed, arranged in pairs aiming at two sheets of three targets each. When they started competing, they would get a maximum of 30 points per round. We watched four rounds, and the world champ had notched up 120 points thus far. He did not have a belly, strangely enough, but a lady on the end was 7-8 months pregnant and still competing...

It was by then lunch time, so we left the strangely un-sportsman-looking sportsmen and snuck into Quick. It was supposed to be a treat. My bacon long burger was anything but. I'm going to write and complain... It was tepid, dry and tasteless. Funnily enough, we saw some of the archers(and their bellies) in there too...
Published at 6:31 pm