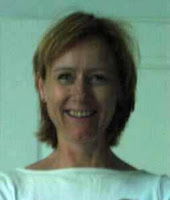 By popular demand (of one - thanks, Gigi!), here I am as a blond bombshell... Not quite the platinum beach babe, but blonder than I was.

I went to see our Boris down the road and told of my cunning plan to go blond and thus be excused forevermore of any vile criticism of ditsiness, being able to put all down to, well, she's blond, what d'you expect...? He uttered the words, "yes, we'll do meche" (streaks - sounds more sophisticated and less like the addition of go faster stickers). So there I sat while he meched away and I wondered, as you do, what the effect would be like with the auburn. Would I turn out like an ageing autumn leaf?

Roughly two hours later, after I'd waded through Gala magazine, gazing in horrified glee at the utter pointlessness of it all, I was staring at me in all my blondiness. I looked almost the same as I had when I was lusciously auburn, just the other side of red.

The photo is crap, I know, it's actually a reflection of myself! With the softer focus taken through the mirror, I don't look quite as ghastly as I did in the glare of the fading light of the bathroom. I think it's quite cinematic in fact.

They didn't even notice at work. I do wonder sometimes, why I bother...
Published at 6:58 pm